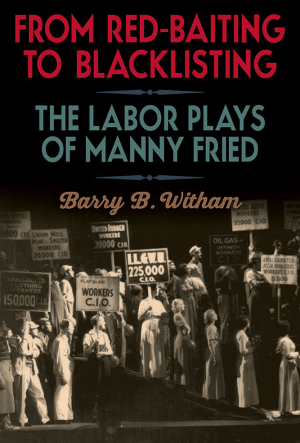 Professor Emeritus Barry Witham's new book, From Red Baiting to Blacklisting: The Labor Plays of Manny Fried, was published this month by Southern Illinois University Press. Professor Witham is the editor of Theatre in the United States: A Documentary History, and the author of The Federal Theatre Project: A Case Study and A Sustainable Theatre: Jasper Deeter at Hedgerow, along with numerous other works.

In From Red Baiting to Blacklisting, Professor Witham reclaims the work of Manny Fried, an essential American playwright so thoroughly blacklisted after he defied the House Committee on Un-American Activities in 1954, and again in 1964, that his work all but completely disappeared from the canon. Witham details Manny Fried’s work inside and outside the theatre and examines his three major labor plays and the political climate that both nurtured and disparaged their productions. Drawing on never-before-published interview materials, Witham reveals the details of how the United States government worked to ruin Fried’s career.

From Red-Baiting to Blacklisting includes the complete text of Fried’s major labor plays, all long out of print. In Elegy for Stanley Gorski, Fried depicts one of the many red-baiting campaigns that threatened countless unions in the wake of the Taft-Hartley Act and the collusion of the Catholic Church with these activities. In Drop Hammer, Fried tackles the issues of union dues, misappropriation, and potential criminal activities. In the third play, The Dodo Bird, perhaps his most popular, Fried achieves a remarkable character study of a man outsourced from his job by technology and plant closures.

Manny Fried’s plays portray the hard edges of capitalism and government power and illuminate present-day struggles with hostility to labor unions and the passage in several states of right-to-work laws. Fried had no illusions about the government’s determination to destroy communism and unionism—causes to which he was deeply committed.