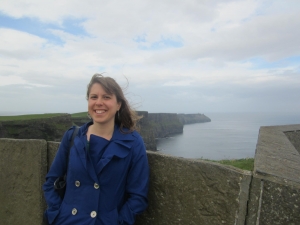 In July, Michelle Granshaw (PhD 2012) was awarded the American Theatre and Drama Society (ATDS) Vera MowryRoberts Research and Publication Award for her Theatre Survey article, “The Mysterious Victory of the Newsboys: The Grand Duke Theatre’s 1874 Challenge to the Theatre Licensing Law.” She also won the ATDS Faculty Travel Award for summer research in New York and Belfast.

Quinlan Corbett (PATP 2008) is starring in Owen Davis's Icebound, on stage at Metropolitan Playhouse through October 19. And the play just received a stellar review - and photo! - by The New York Times.

Scott Kaiser (PATP 1985) released his third book on Shakespeare, entitled The Tao of Shakespeare: A Book of Meditations.

Mitchell Thomas (PATP 1999) is currently in repertory with the Lit Moon Theatre Company, working on Anton Chekhov's The Cherry Orchard and Shakespeare's Hamlet. He plays Hamlet at the National Theatre of China this month, as well as the Bitola (Macedonia) and Durres (Albania) Shakespeare Festivals in Summer 2015.

Czerton Lim (MFA 2006) is the new Assistant Professor of Scenic Design for the Department of Theatre and Dance at SUNY Fredonia.

Marianna de Fazio (PATP 2010) was the dialect coach for The Invisible Hand at ACT Theatre and just appeared on stage in Athena Theatre Project's production of The Bunner Sisters at Theatre Off Jackson, which also featured Annette Toutonghi (PATP 1992) and Jim Gall (PATP 1992).

Photo: Michelle Granshaw (PhD 2012) in Ireland this past summer.