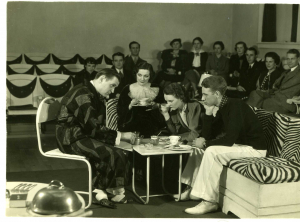 The Dover Road - April 1935. The opening production in the original Penthouse Theatre, a leased building on 42nd Street near University Way.

The University of Washington School of Drama is one of this country's leading training institutions for theater artists and scholars. Eighteen faculty and 20 staff members serve 60-100 undergraduate majors and 50 graduate students. The School offers a four-year undergraduate liberal arts education, Masters of Fine Arts degrees in acting, design, and directing, and a PhD in theater history and criticism.

The School of Drama traces its origins to 1919 when Glenn Hughes, a young man from Nebraska and a recent graduate of Stanford University, joined the faculty of the Department of Dramatic Art, a part of the English Department. Though he came to the UW as a poetry fellow, Hughes soon became determined to create a first-rate drama school.

From 1930 to 1961 this indefatigable man led the Department, which became the School of Drama in 1940. He wrote more than 60 plays, wrote and edited various literary and scholarly publications, launched one of the West Coast's first foreign film series, and established the drama program as the center of theatrical life in Seattle. The University of Washington came to be recognized as one of the leading institutions in the nation for professional training in theatre arts.

Hughes' vision included children so that he could develop the audiences and performers of the future. Puppetry was offered in 1930, and in 1936 the U of W Puppeteers became the first touring unit of the department, playing to more than 27,000 youngsters annually until 1959. At that time, the tours and workshops were taken over by the Valentinetti Puppeteers which operated on-campus until 1992. Training in the theatre arts also included the most comprehensive program in child drama and theatre in the United States, a program that attracted students from this country and abroad.

A mission to save theatre

Hughes believed that theatre was on a rapid decline in America, due to the Depression and to competition from radio and movies. His solution was that university theatre programs should come to the rescue of legitimate drama. In order to revive theatre-going, Hughes believed that universities must offer performances regularly and frequently. For 30 years, students, faculty and staff in the School worked feverishly to mount a continuous offering of plays, each running six weeks, in addition to tending to the demands of the academic curriculum. The School's theatres were rarely dark, fostering an enthusiastic patronage in Seattle that included civic and social leaders (who dressed in tuxedos and gowns on preview gala nights) and many community clubs.

With funds from the Works Progress Administration, Hughes had two theatres built on campus between 1938 and 1940: The Showboat Theatre, a 200-seat faux Mississippi steamboat which sat on pilings at the UW's Portage Bay waterfront, and The Penthouse Theatre, an Art Deco-styled arena stage that was the first of its kind in the country. This theater was renamed The Glenn Hughes Penthouse Theatre in 1991 and moved from its original location to north campus in a landscaped grove near the School of Drama's Hutchinson Hall. In 1951, the UW purchased the brick Seattle Repertory Playhouse (now called The Floyd and Delores Jones Playhouse) in the University District.

The Penthouse Theatre and the Floyd and Delores Jones Playhouse, fully modernized, remain in full use today. The School also produces in the Studio Theatre in Meany Hall, a 250-seat house. In 1994, the Showboat Theatre was destroyed after lying in disuse for ten years. Designed to last 25 years, the 55-year-old theatre was beyond repair and succumbed to the wrecking ball despite alumni efforts to save it.

Under Hughes' leadership, the Drama program became a center of Seattle's theatrical life and a respected part of its cultural milieu. Since that time, the School has been known for providing Hollywood with such great talents as Ella Raines and Frances Farmer and, among today's celebrities, alumni Joel McHale, Rainn Wilson, Ron Simons, Lois Smith, Robert Culp, Patrick Duffy, Jean Smart, Pamela Reed, Kyle MacLachlan, Harry Groener, and Richard Karn.

In 1961, Hughes retired and was succeeded by Gregory A. Falls. Falls created the Professional Actor Training Program—a prestigious BFA program (now MFA) that placed the School among the nation's top professional acting conservatories—and initiated the PhD program in theatre history and criticism. It was during this time that the stream of UW Drama graduates began pooling right here in Seattle. Graduates and former faculty stayed in the city, founding their own theatres and establishing what is today one of the country's most active and diverse theatre communities.

Audiences at these theatres have come to count on the bravura performances of alumni such as John Aylward and Lori Larsen, as well as scenic designs by Norm Scrivner and lighting designs by Michael Wellborn. Actors Annette Toutonghi and Alban Dennis, and costume designer Paul Louey, are favorites of young audiences at Seattle Children's Theatre.

MFA students in acting, design, and directing practice their stagecraft during a full and varied play season, mounted at the Penthouse Theatre, the Floyd and Delores Jones Playhouse, and the Meany Studio Theatre. Works range from Shakespeare to Arrabal, Euripides to Chekhov, new plays and musicals, as well as contemporary favorites from Horton Foote, Sarah Daniels, and Alice Childress.

Undergraduate students pursue a broad liberal arts education while gaining hands-on experience in mainstage and workshop productions. The Undergraduate Theatrical Society (UTS) produces work in the Cabaret Theatre in Hutchinson Hall. UTS lends support and resources to undergraduate projects and has been instrumental in the increased number of shows and festivals put on by our BA students.

The reputation of the PhD program is also distinctive. Doctoral students are frequently invited to serve as panelists at theatre conferences around the world. While contributing to the scholarship of theatre history, theory and criticism, PhD students teach in the BA program and serve as dramaturgs for UW productions. A sampling of schools where our graduates teach includes Purdue University, The Ohio State University, University of Hawaii, University of Minnesota, Tulane University, and University of Texas at Austin.