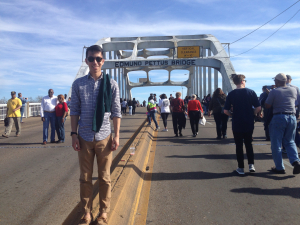 Simon Tran at the Edmund Pettus Bridge during the Civil Rights Pilgrimage with UW's Dept. of Communication.

What does research in the arts look like? Executive Director Todd London has poised this question to the students and faculty of the School of Drama—and the larger University of Washington community—since stepping into the position in August 2014. In March, the performing arts units at the University announced a three-year $750,000 grant from the Andrew A. Mellon Foundation that will fund a pilot Creative Fellowships Initiative to explore the nature of creative research at a top public research university. While planning for implementing the initiative continues, it is undergraduate students at the School of Drama who are leading the way in engaging with creative research.

Rhoya Selden received a Mary Gates Leadership Scholarship. Under the mentorship of faculty member Scott Magelssen, Rhoya has been conducting two projects: oral history and ethnography research with local Iranian Americans. The Mary Gates Leadership award will assist with her Drama honors thesis. Rhoya says, “I am devising a one-act play that explores the Iranian-American experience and what it is like to build up your life only to have it threatened to be taken away from you due to ‘axis of evil’ hysteria and Islamophobia.” This piece of documentary theatre is for both those in the community and those with no exposure to Iranian culture. Rhoya plans to present the work in conjunction with a community dinner and panel discussion this summer.

Simon Tran received a Mary Gates Research Scholarship for his research centered on interraciality and intergenerationality in the LGBTQ community. His work builds from his experiences participating in two Civil Rights Pilgrimages with the UW Department of Communication. Simon wrote about his most recent trip and its effects on his approach to his theatre work for the Drama blog. Simon previously combined his interest in social justice and minority empowerment with his background in drama. Last year, Simon formed the improv group Racy Sketchy Sexy in order to investigate social justice and minority empowerment through intentional conversations.

Dominic Racelis received both the Research and Leadership Scholarships, which will support his production of The Last Five Years, advised by Wilson Mendieta, program director for Musical Theater. Dominic’s production will feature all actors of color and his research examines what it means to be a performer of color in America and the challenges that artists of color face. Performances of The Last Five Years will run May 20–22 at the Ethnic Cultural Theatre.

Simon and Dominic will present their research at the Undergraduate Research Symposium on May 20. Rhoya will also be there presenting her History honors thesis research. What’s striking about the research engaged in by these students is the component of making work. While we often think of research as diving into history or observing matter separate from your own self, these students are demonstrating a research process that is concurrent with the creation of art. As often seems to be the case, the rest of the School of Drama, as well as the other performing arts units, will be following the lead of our intrepid undergraduates.