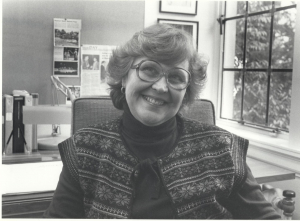 Former School of Drama Executive Director Betty Comtois passed away in early December. We send our deepest condolences to Betty's family and friends, and to her former students and colleagues. Below is Betty's obituary. If you would like to make a donation in Betty's honor, the family suggests making a gift in Betty's name to the Arboretum Foundation.

Mary Elizabeth Comtois, sister, wife, mother, grandmother, dramaturg, professor emeritus, friend and mentor, passed away in her home on November 27 at the age of ninety, surrounded by her family.  Raised in Pittsburgh, PA, Betty was a graduate of Wellseley College, Massachusetts, after which she studied at the Royal Academy of Dramatic Art in London.  Returning to the states, she was hired by Kermit Bloomgarden, a Broadway producer, to assist such luminaries of the American theatre as Lillian Hellman, Arthur Miller and Meredith Wilson.  Assigned to the latter during his writing of The Music Man, Betty told him his characterization of Marion was shallow. When challenged to define her better, Betty said, “She just wants someone who is not afraid of a few nice things.”  Thus, at the age of twenty-three, Betty had discovered both her passion for new plays and her ability to say what needed to be said.  Encouraged by author Mark Harris to explore a writing career, Betty received her MA in Creative Writing from San Francisco State, after which she discovered Yosemite, and what would become a life-long love of the park. She also discovered Richard Comtois. The two married and had two daughters while she pursued a PhD in Theatre History from the University of Colorado. Returning to the east coast with her family, Betty was hired by Jack Bettenbender at Rutgers University, where she began a playwriting program and established the Cabaret, a theatre space run solely by students to produce the work of students.  Her arrival at Rutgers coincided with Jack’s dream of an MFA program that she helped to usher in.  She then became the first chair of the theatre department in the newly formed Mason Gross School of the Arts, still considered one of the preeminent actor training programs in the country.  In 1985 Betty and Richard, ready to make a change in their empty nest and very attracted to the charms of the northwest, moved to Seattle. Betty led the School of Drama at the University of Washington and, staying true to her resolve about the importance of new plays, established a playwriting program there. After ten years, Betty retired and became a Master Gardener, avid book club member and continued mentor to playwrights. She is survived by Richard, her husband of fifty-six years, sister Ann Rappaport, daughters Kate and Liza, grandson Julius and countless friends and students.  A teacher and mentor for so much of her life, she taught through the example of her life:  her willingness to know herself, her fearlessness in taking the next step even if it meant crossing the country numerous times, and her grace and resolve upon arriving at a new place with new challenges – these are what remain the inspiration for all who were privileged to know her.