Today kicks off our annual "Meet a ____" blog series. From now until the end of the school year, we will be introducing and celebrating our graduating students, looking back on the work they've done during their time here, and sharing their reflections and wisdom as they head off into the professional world. Later this month, we will start introducing you to some of our graduating BAs, designers, directors, and PhDs, but today, we're kicking off the series with graduating PATP actor Allyson Lee Brown. 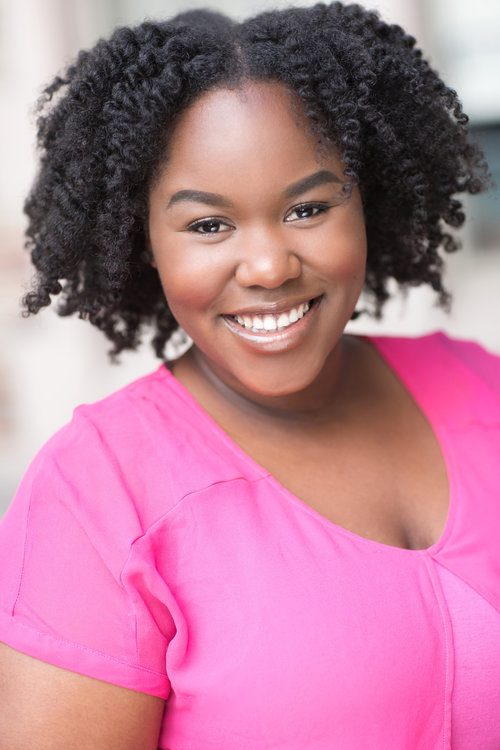 What do you know now that you didn’t know when you started this program? I know that I’m fully capable as an artist, and that everything that I need to succeed was already in me. But, you know, it’s a journey. You have to really tap into each part of you, you know? You level up each time. So that’s something that I know more clearly now. Like, a role that I never would have thought I could have played, I have the tools in me now to play that role, to tap into that character. I’m just excited to continue to reveal those parts of me that have not yet been revealed. Cause you don’t learn everything in three years! But you do find things to be more accessible. And I think especially the first year, and kind of breaking down the being that is Allyson, opened me up so much more to being willing to go there with characters, being willing to put myself on the line, to tap into that vulnerability or that uncomfortable place. So, I just feel way more confident to do those things as I’m heading out. And yeah, just, get up and fly.

What are you looking forward to being able to do now that you won’t be in class or rehearsal 12 hours a day? Of course you want to say rest, but I’m the type of person where my engine is always running, and I have a desire to keep going. So I’m excited to become more familiar with the community of artists out here, and to teach more. I love teaching. And hopefully going on a trip with my family for a little bit in between rehearsals. But my thing is, when people ask me, "What’s next?" or "What are you doing?" I’m like, "I’m just following God." That’s literally what I’m doing. That’s how I got here. I just put myself in the position to trust that things will happen, so, while I’m in this transition, it is just saying, "Okay, I know I don’t want to be bored." And that will probably happen, but I’m just trying to keep the engine running as much as I can.

Any plans for after graduation? Like I said one of my personal ones is to go on a trip with my family. Professionally, I will be teaching. And then I will be in a show called Citizen with Sound Theatre (based on the book by Claudia Rankine), and that runs July 11 - 28, directed by Jay O’Leary. And I’ll be teaching through the summer at a couple of local high schools, then also working with We.APP. [Editor's note: We.APP is a Seattle-based organization that prepares adults, youth, and organizations to use their voice to develop powerful, authentic messages, founded by UW alumnus Toyia Taylor.]

Do you have a favorite memory from your time here? Ahhhhhh. So many memories. Hm. That’s a hard question. One of my favorite memories was last year during one of the 3s' cabarets, and Val [Professor Valerie Curtis-Newton] got up and performed a piece, and just to see, you know, someone that we admire, and to hear the rhythm and the magic, because it was about that Black magic, and to see her up there performing and just free, without inhibition. We were all so invested in it. And then, okay, I’ll give you one more: doing Fefu and Her Friends. That whole process. Just being in a room full of women, where you can just be. That was the most free I’ve felt here, doing that show, being in a room full of women that you trust to support you in your art. Coming into rehearsal, it was just like, we didn’t have to put anything on, and I loved that.

What advice do you have to people who might follow in your footsteps? Trust yourself. Know that you have power. Do not make yourself small, because that is so easy to do. You will always think, oh there’s someone in the room that’s smarter than me, or better than me, or more talented than me, or more likely to succeed than me. Those things are set up for us in high school, when you have the yearbook, you know, oh she’s most likely to succeed, so it’s already like we have eliminated ourselves from certain things. You just really have to know, I'm worthy of all of those things, and my light will not be dimmed for anyone. Just really step into your power. That thing that you’re afraid of, do that. That’s something that I’m experiencing right now with writing my solo show. Whatever I write and I’m like, yo, that’s scary, I’m like, keep it. Go in that direction, and take hold of every opportunity. Say yes until you really have to say no. Because you don’t know what blessing you’ll get. You don’t know what people you will meet.

And really take advantage of every networking opportunity that you have. But in those networking opportunities, be yourself. People don’t want to get a presentation of you, they want you. Same thing when you audition. Your slate is you. Your slate is not a performance of you, it’s you. So that’s one thing is like, while you’re here, yes you continue to learn more about yourself, but through that, be your authentic self. It's hard. And breathe. Take time to take care of yourself. That’s a huge thing--self care. Because actually you realize how much you put yourself on the back burner. Because [you think] I need to fight for my art and struggle for my art, but also you need to take care of yourself so that you can do it, so that you can bring your all to that character, so that you can be there and support your ensemble. That’s really really important. And we have the resources here, so use that, because when you get out there you’re gonna have to start paying an arm and a leg for it. So, yeah. Those things. Self care, trusting yourself, and being who you are fully.