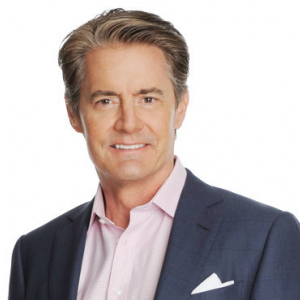 Kyle MacLachlan is perhaps best known for his performance as FBI Special Agent Dale Cooper in David Lynch's ground-breaking series, Twin Peaks, for which he received two Emmy nominations and a Golden Globe Award. Kyle has also starred in Desperate Housewives and Sex and the City. Recent appearances include President Franklin D. Roosevelt in Atlantic Crossing, Doctor Karlock in Capone, Calvin Zabo in Agents of S.H.I.E.L.D., The Captain on How I Met Your Mother, US attorney Josh Perrotti on The Good Wife and an ongoing role as the Mayor of Portland in Portlandia.