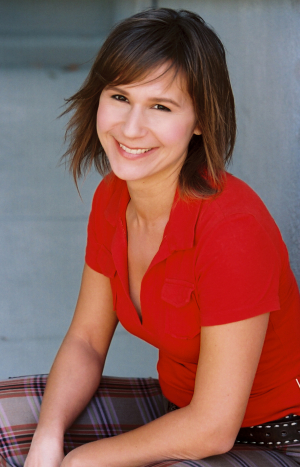 Tina Polzin moved to Seattle just a few months before receiving her acceptance into the UW MFA Directing program. “I believe in actualizing what you want and I was really happy with the way my choices manifested themselves.” Now, in the middle of her second year, Polzin is directing the world premiere of EM Lewis’s Reading to Vegetables. She took time out of a busy schedule to talk about what drives her to direct, the lessons she’s learning, and what the future may hold.

For your autumn quarter directing project, you chose The Twentieth Century Way by Tom Jacobson? What drew you to it?

It’s a challenging play on many levels. On the academic side, it took a lot to dive into exactly what the events were and how to make it clear to the audience. Two actors play eight to twelve characters each and scenes switch really quickly. On the content side, I knew some people would have strong reactions to it. Television is moving towards portraying more homosexual characters, but without intimacy. We pushed to show that intimacy. Same sex couples can also fall in love and can have a romantic kiss. Unfortunately, it is complicated by how society has traditionally viewed same sex couples, and how people still view them.

Did audience members have strong reactions?

There were a couple people who had difficulty watching the content, but it was great that they owned it and they were honest about, and they came anyway. They were invested in the play. At the end of the day, that is the best comment. They were there and they were with the characters.

What lessons did you learn?

It reminded me to always stay open to how I can best facilitate the action and help the actors portray the story. Time was running out and we changed everything! It was a great lesson in remaining an active investigator into what’s best for the story.

Let’s talk about Reading to Vegetables. Why did you propose it?

I wanted to work on new plays this year. New work is something I’m passionate about. And Ellen is a fabulous writer. I am drawn to plays that have a strong social or political message told through a very human story, and I like them to be entertaining. I like to laugh, or to be surprised. Vegetables unfolds like a Hitchcockian thriller – you know something happens at the beginning, you just don’t know what until the end.

We talk about moral decisions like there’s a clear right and wrong, but they’re complex and I think we need to be continually reminded to actively listen to our decisions and the consequences of our decisions.

How closely are you working with the playwright, EM Lewis?

Ellen and I have been in contact since I told her we were doing the play. I’ve come up with my ideas and talked with the designers about their ideas, and I always check back in with Ellen. We’ve talked about some changes she would like to make and I bring to her the ways that I’m interpreting what’s written. Just like with the design team, we question each other and investigate what’s best for the story.

How is directing a play by a living playwright different than one that is not?

A living playwright is around to tell you their intent. I would hope if you are choosing to work with a living playwright, that’s part of what you enjoy and that you want to make sure the vision you’re bringing to the stage is true to their vision.

What is your vision for Reading to Vegetables?

Our spine is “to find the line.” All the characters are on a journey to investigate their responsibility. It’s all about the line between fantasy and reality, doing good or doing bad, silence or voice. In each situation, which is the best mode to proceed? And how do you know? As a design team, we have our own line. We want to give it that feeling of a Hitchcockian thriller without taking it so far that it’s no longer in service to the story.

What are the advantages of pursuing an MFA and why the UW?

You get feedback in a constructive and concise way, and then you have the time to apply it and get more feedback. You have time to devote just to art. I knew I would have the concentrated time to work on my craft and figure out how to better it, and in bettering it be able to sustain myself with my art.

I was really impressed that Val [Professor Valerie Curtis-Newton, Head of Performance] was willing to tackle both how we would advance me as an artist and the pragmatic aspects of cost and how to make directing a career. I particularly like that the UW has a multi-racial faculty with experience both in the States and in Europe, and that there is a female head of directing. The UW was the only school to have all of those elements in a place that I wanted to live, with a theatre community in which I would like to work.

What are the differences between working in an academic setting versus the professional world?

Everyone at the table with you is trying to improve their skills. How do we help each other become better artists? Not only do you have the feedback from the professors, you have the support of the other grad students who are pursuing the same goals. The opportunity to speak with other directors on a daily basis is not something you get in the professional world. The opportunity to interact with other people in your field is invaluable.

Have you noticed any major changes in how you work since arriving at UW?

I’m becoming more precise with my work. I’m finding a better balance between preparation and improvising in the room. I also feel like I’m getting more of a sense of who I would like to be as a director. What’s my voice? What are the companies I want to work with? What are the things I want to say? What’s important to me?

What are the companies you’d like to work with in the future?

I really like that The Rep and ACT foster local artists. They have programs for creating new works. I’ve been able to intern or work at both places and it feels like there’s a community. I feel the same way about Taproot. In Northern California, there’s Berkeley Rep and TheatreWorks. I appreciate places that have new works, hire local artists, have a connection to their community, and are also giving their community a broader view. The main thing for me is that there always be a connection between local artists and the people that are directly near that theatre. I’d like to find a place where I continually make work that I and my fellow artists believe in and that is affecting a community of which we are a part.

Are there any dream plays you’d like to direct?

The Hostage. I’ve been in love with Irish theatre since undergrad. The thing I love about Irish plays is that they are very hard-hitting and gritty, and can be grotesque at times, but are also whimsical and funny. The laughter and surprise opens your mind to the larger messages. In The Hostage, there are a lot of elements to grapple with. There’s song and dance, and a big shoot out, but at its heart, it’s a simple love story.

What would you like to accomplish during your remaining time at UW?

I’m very grateful to grad school for exposing me to different types of theatre artists with different disciplines and different backgrounds. The program that Val and the rest of the faculty have created pushes us to explore options that we may not have had the opportunity to pursue or think of. I would say, during my time here, I’d like to continue to broaden my horizons.