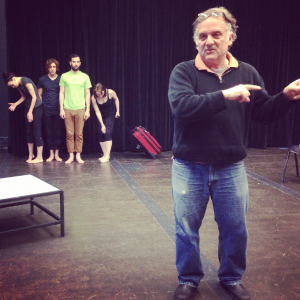 For the first three weeks of spring quarter, our Professional Actor Training Program students worked alongside company members of New Paradise Laboratories (NPL) and under the direction of visiting artist, and director of the first show of our 2014-2015 season, Obie award-winning NPL Artistic Director Whit MacLaughlin. Whit recently answered some questions via email, reflecting on the three-week residency and the pieces born out of the experience.

What influenced you to take on this residency in partnership with the School of Drama?

I worked with UW Lighting Design Professor Geoff Korf (now also head of the MFA Design program) in 1992. It was on one of my favorite projects ever, a rich and unusual production of Euripides’ The Bakkhai that he designed. I always sought to work with him again, but it never happened – a bicoastal separation problem. One day in the spring of 2013, I sent him a bit of NPL’s work by email and, coincidentally he called to invite us out. We were absolutely thrilled! I had heard great things about the UW School of Drama over the years – I studied Suzuki Actor Training Method in Japan and there has been the consistent presence of a Suzuki teacher here at NPL over the years. I was fascinated and enthusiastic about the opportunity from the beginning.

How did working with our MFA students and the environment here at UW School of Drama influence your company’s work on The Adults?

So this became the arrangement: I would bring the NPL company out to Seattle and we would combine the groups to see how they might influence each other. At NPL we have been working on a piece called The Adults which has been influenced by Chekhov’s The Seagull and the paintings of Eric Fischl. I saw there was an opportunity to work at UW both on an NPL piece and on an MFA piece derived from some of the same source materials. We became interested in the potential reverberations. With the MFA students we chose Treplev’s Play from The Seagull as a starting place. The two pieces swirled around each other and began to emerge as doppelgangers.

This is the first time we have attempted two simultaneous piece developments. We’ve often created pieces sequentially, in groups of three, but they have never been born as twins. In real life, I have identical twin daughters, so the whole scheme seemed preordained. Natural. Destined.

The companies got along REALLY well. The MFAs had an opportunity to see how our training methods resulted in interesting and well-rounded actors over time. The NPL actors got access to performers just starting in the techniques they had practiced for years. There emerged some interesting synergies springing from the act of gazing into a figurative mirror.

In point of fact, the companies got along REALLY well. The MFAs had an opportunity to see how our training methods resulted in interesting and well-rounded actors over time. The NPL actors got access to performers just starting in the techniques they had practiced for years. There emerged some interesting synergies springing from the act of gazing into a figurative mirror.

It’s still fairly early in the process. There are many differences between the two pieces, but they overlap in subtle and interesting ways. NPL’s is a character piece and UW’s is a choral piece. We are still working on the design of Cold Empty Terrible, but I am finding that the two pieces seem to be linked telepathically. Similarities are emerging. I am learning about each from the other. It would have been great if the two casts could have been working together in the same place throughout the entire process. But I’d probably explode from the intensity.

As you began to work with our students in building the world of Cold Empty Terrible, what sort of elements and themes rose to the surface?

Time. Love. Artistic mission and the end of the world. Elemental human topics. In the UW group we started by talking about the things that obsessed us as children. It’s just true that many of those same things are still on our minds, and will be for the duration of our artistic careers. That’s the thing about devising. It’s strangely personal AND objective. It requires artists to see how they fit into the world and take responsibility for the content of their expression in the absence of a playwright. It can be a profound and vulnerable experience.

It requires artists to see how they fit into the world and take responsibility for the content of their expression in the absence of a playwright. It can be a profound and vulnerable experience.

What surprised you during this process?

I was pleased that the students came round quickly to appreciating our devising process. It’s not foreign to work they undertake everyday in studio classes. I had some convincing to do at first because there’s a fair bit of body training that comes along with our process – it’s pretty rigorous and different from other trainings they undertake in studio – so they were both facing physical challenges AND being asked to expose their core beliefs in front of people they barely knew. It took some time to build trust. After a few days came the pleasant surprise. The work felt friendly, deep, and free of impediments.

What are the next steps in moving forward with the process of building this show?

There’s a fairly big time gap between work periods in Seattle. We’re currently working like fiends on The Adults. It opens in September, then IMMEDIATELY, after barely a night’s sleep, I come out to complete Cold Empty Terrible.  So next we have to get a design squared away – for a piece that barely exists – then we’ll take it one day at a time.

It’s hard to preplan this sort of work – it unfolds in the rehearsal room.

You’ve worked with students in other MFA programs across the country; is there something about the students and/or atmosphere here at UW that is unique?

The students at UW are disciplined and hard-working. It appears that slackerism is not tolerated. That’s great. The students are unusually diverse – I like that as well. There seems to be a wide variety of religious and economic backgrounds. But one of the things that stands out to me as I write, is that the group is very funny. They like to laugh. And they love to bust on each other. It makes for an uncensored and vibrant artistic environment.

The UW program is very encouraging to a wide variety of expressive possibilities and that is a profound attribute.

What was your biggest takeaway after spending three weeks in residency here?

I got to visit Mt. Rainier. Plus, I got to walk up and down Mt. UW, about 6 times a day. My legs improved. And I love your theatre facilities and the fine folks on the faculty who reached out to us. I worked so hard that I barely got to see Seattle. I’m looking forward to my return. The primary takeaway? The feeling of being supported in whatever crazy thing we eventually cook up. The UW program is very encouraging to a wide variety of expressive possibilities and that is a profound attribute.