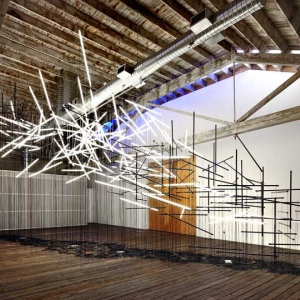 The title – Never Finished – may be in part an exasperated sigh to the feeling of the work for the piece never ending, but LILIENTHAL|ZAMORA’s new installation at Suyama Space also takes its name from its composition.

“I think we’re looking at one slice of something that goes on and on and on,” says Ben Zamora, who earned his MFA in Lighting Design from the University of Washington School of Drama in 2005 and is one half of LILIENTHAL|ZAMORA, a collaborative creative team working primarily in sculptural light installation. We’re sitting inside Suyama Space, looking at Never Finished just days before its public opening, and talking about the genesis and circumstances of the work. In addition to his work as part of LILIENTHAL|ZAMORA, Ben is a faculty member at Cornish College of the Arts (previously at Seattle University) and is a freelance lighting designer for theatre and opera.

Never Finished is a companion piece to the duo’s 2012 installation at the Frye Art Museum, Through Hollow Lands. During the creation of the Frye installation, Ben says, “I felt pulled in multiple directions. Emotionally, this new piece resonates with that time. There’s a lot of tension; a lot of things pulling at each other.”

I ask Ben how it is creating a piece that he brings a lot of personal experiences to, but is part of a collaboration with another artist – and another set of personal experiences. “I think we each have our own connections with the work,” Ben explains. “I think there are some things that create certain tension between Etta [Lilienthal] and me. And I think that is often good. It makes the work get bigger than it would be if it was just one of us.”

“I think there are some things that create certain tension between Etta [Lilienthal] and me. And I think that is often good. It makes the work get bigger than it would be if it was just one of us.”

Ben and Etta’s collaboration started in theatre, on a project at Washington Ensemble Theatre. Their design work on God’s Ear, directed by Richard Bennington, earned them a spot on The Stranger’s 2009 Genius Awards shortlist. Ben remembers a moment during tech when he turned to Etta and said, “Etta, this play is amazing and it is going to be great, but this combo of what’s happening with the light and the space is actually incredible. Can we just do that?” A couple of years, and a collaboration at the Intiman, later, they made good on that moment with the inception of LILIENTHAL|ZAMORA.

Ben credits Etta with giving him the permission to take his work to a whole new place, for which he is incredibly thankful. It’s unlikely that any of his former UW professors are surprised to see him arrive here. Ben remembers hearing from one of his peers that Geoff Korf, his mentor and professor of lighting design, thought Ben was more interested in art than in theatre.

“I think I was trying to make theatre the thing that served as my art, and now it’s more fluid,” Ben says. “There’s a lot of similarities between what I do now with visual art and what I do with theatre. They’re just different mediums. Sometimes there’s a bridge where the sculptural work or the lighting work wants to be part of the performative work, and sometimes there’s not, and it’s still rewarding.”

“I think I was trying to make theatre the thing that served as my art, and now it’s more fluid. There’s a lot of similarities between what I do now with visual art and what I do with theatre. They’re just different mediums."

LILIENTHAL|ZAMORA’s installations are experiential. Ben sees that relating to theatre in a big way. In the theatre, an audience member is looking at the action occurring onstage and connecting with it in some way. With LILIENTHAL|ZAMORA’s installations, the viewer experiences the art based on their own story. Ben describes it as “looking at something and also being part of that something.”

There are differences too. While theatre works to mask its mechanics, Never Finished and Through Hollow Grounds acknowledge the hand at play: the wiring and rigging are all exposed. “I don’t believe in a higher power. I believe we’re here, we live, we die,” explains Ben, “but I do believe in some sort of transcendence. I believe in humans being able to push themselves to different levels.

“As artists, I feel there’s something about making work that allows that transcendence to happen and also acknowledges that this work is made by a human. This thing is here on Earth, in the room with you. It is meant to go up with you, as opposed to trying to pull you up towards it.”

In that way, Never Finished is a collaboration between Ben Zamora, Etta Lilienthal, Suyama Space, and the viewer.

Never Finished is on view at Suyama Space through December 19. More information at suyamaspace.org.