Elizabeth Wu Faces the Fear in the Rehearsal Room 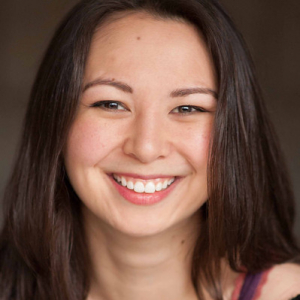 This January, undergraduate Elizabeth Wu takes on David Henry Hwang's 'Yellow Face' for her directorial debut with the Undergraduate Theater Society. Elizabeth is a senior majoring in Drama and English. In addition to her coursework and directorial duties, Elizabeth serves on the Drama BA Council and as the student representative to the School of Drama Advisory Board. In this post, she reflects on finding her courage as a director.

Sitting in Cammareri Café, just on the edge of Fort Greene Park, I wait anxiously to meet an artist that I have long respected and admired. Having just gotten off the plane from Edinburgh the day before, I clutch my coffee close. That summer I learned a great lesson from my study abroad TA and current MFA Directing candidate, Leah Adcock-Starr: jet lag was no match against a double shot 8oz coffee. I hear the café door open and look up to see playwright David Henry Hwang walk in. I smile and wave (the kind only an overly-eager undergraduate can produce).

“Are you Elizabeth?” he asks.

It was thanks to my creative writing professor, Shawn Wong, that I was able to meet with David in New York City last summer. Most of what I remember from our interview can be summed up in these few words: fear, exploration, excitement, and bravery. I would similarly use these words to describe the process of directing Hwang’s play, Yellow Face, for the UW Undergraduate Theater Society. For those of you who are unfamiliar with the story, or who were unable to see the Pork Filled Players 2011 production, it follows the story of David Henry Hwang (DHH) as he navigates the accidental casting of a Caucasian actor as the lead Asian role in his play during the 1989 Miss Saigon scandal. Never heard of the Miss Saigon scandal? Google it. Or better yet, read and come see the play. We open on January 22, 2015.

Now, already half way through our rehearsal period, I pause to reflect on the journey our team has been on and how we’ve arrived at this point. I think about the challenges that I’ve faced as a beginning director, the obstacles I’ve overcome, and what lies in store once we return from the winter holiday.

The best gift I have given myself so far during this process is the acceptance of my own fear. No one could have prepared me for the terror that comes with being a first-time director.

The best gift I have given myself so far during this process is the acceptance of my own fear. No one could have prepared me for the terror that comes with being a first-time director. I was a bundle of nerves the day I met David in Brooklyn, my anxiety was through the roof when I began production meetings with my design team, and when the eight wonderful undergraduate actors I had cast for the show stared at me from across the table at our first read through all I could think was: What am I doing here? Who the hell put me in charge of these people?

You find the fear in the room and confront it. That’s what Professor Valerie Curtis-Newton always told us in directing class. If nothing else, that’s what I did for the first half of Yellow Face rehearsals. I showed up, opened my script, made eye contact with everyone in the room and thought “What am I afraid of today?”

Some nights were more difficult than others. Some nights I would end rehearsal almost an hour and a half early simply because I had no idea what I was doing. Guilt was rampant. Why was I even there? Why was I wasting everyone’s time?

But in this process of showing up to rehearsal, interacting with the actors, and confronting the fear in the room night after night, something incredible happened to me…

I found my courage.

I showed up, opened my script, made eye contact with everyone in the room and thought “What am I afraid of today?”

Before I knew it, fear was taking the back seat. It now became a question of: What is the dramatic action in this scene? Is there a moment of denial here? A moment of realization? A moment of reprieve? Where is the change in composition, movement, tempo, gesture, voice?

Above all, why does this story take place? Of whom does this story concern? Why here and why now? I knew this production would have a particular resonance with the recent events surrounding the Seattle Gilbert and Sullivan Society’s Mikado last summer, but having been away on my study abroad I had had a very limited exposure to the controversy. Not only did I want to read and direct a play concerning Asian American social activism, I wanted to hear from the people it directly impacted as well. So we organized cast and crew trips to the Wing Luke Museum, we invited leaders from the Seattle Asian American theater community to come in and talk at our rehearsals, and we also conducted our own dramaturgical research on Asian American theater and cultural appropriation.

I am not the same person that I was a month ago. I am more daring, more compassionate, a better listener, and better educated thanks to this play. The team that I once had anxiety leading, I now rejoice in collaborating with. As we approach the end of fall quarter, I smile because there is nothing but gratitude and excitement for the work we’ve accomplished and the work to come.

'Yellow Face' opens January 22 and runs through February 1. Keep an eye out here for a second post from Elizabeth in January 2015.