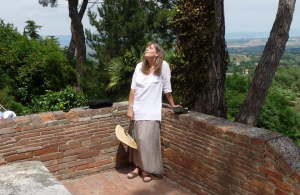 Facebook, for all its foibles, can “catch us up” with people we care about but may not see for years. When I found Susan Riddiford Shedd (PATP ’89) online a few years ago, I was so delighted to see she was at Penn State—near where I grew up, and definitely where my theatre life began. The news posted in late November by PATP alum, Jim Lapan, was not news I wanted to hear:

Big, big sad. My dear friend, classmate, roommate, and west coast sister Susan Riddiford Shedd has passed away in Pennsylvania after a longish struggle with cancer. She could have been a movie star, but she didn't want that. She had a knack for listening to her heart and doing things her own way.

Jim says of her:

She paid attention. She paid attention to everything. We were roommates. She got really upset with me one Thanksgiving when I bought sweet potatoes instead of yams, or maybe it was the other way around. Who knows? Later that day, she was over it. She loved working in the theatre and she was good at it, but she wasn't especially interested in the politics of the profession so much as the work itself. Susan was happier building a new company with friends than networking the high profile opportunities she clearly could have pursued. Ultimately, Susan was about family, and I feel fortunate to have been a part of her chosen family.

She could have been a movie star, but she didn't want that. She had a knack for listening to her heart and doing things her own way.

Susan Riddiford Shedd was a student in UW Professor Emeritus Jack Clay’s first professional actor training program cohort in 1986. He says of her:

She was not only a stunningly beautiful woman, but a richly talented actress. Her early death from cancer is a profoundly sad loss for us all. But I am deeply grateful for the privilege of having her as a student. Back home in Pennsylvania, her distinguished career as both actress and producer of theatre would make any teacher proud. Bless her. Bless us all.

Centre Daily Times (State College, PA) ran a story of her career that includes co-founding the Seattle Shakespeare Company and founding the Nittany Valley Shakespeare Company and Camp Bill, a theatre camp for children. From the Centre Daily Times story: “The communities of Seattle and State College benefited not only from her exceptional talent as an actor but also her advocacy for the arts as a director, producer, and teacher.”

This evening I have the bittersweet obligation of opening Blithe Spirit and I will be performing in her honor. Jack D. Clay once said, "Look around at your class, those around you are the ones who will make you great." This may be paraphrased, however, I owe Susan a world of debt. I expect her spirit is not done with us...

Kate Clarke (PATP ’00), assistant professor of Theatre Arts at Juniata Theatre, is another alum who was lucky to know Susan on both coasts:

We reconnected in central PA, where we had been both living, teaching, and acting…I feel so grateful that we were able to cultivate a friendship that felt like a kinship on this side of the country.

Susan even has a connection with a current third year PATP student, Sunam Ellis:

I was blessed to work beside Susan Riddiford Shedd in A Streetcar Named Desire as I re-entered the world of theatre after a 6-year hiatus (her Blanche DuBois was breathtaking/heartbreaking/a wonder), and she took me under her wing for the next couple of years. She was generous that way. Her stage work always had me leaning in. She was absolutely fearless on stage and in life: a beautiful soul.

Her stage work always had me leaning in. She was absolutely fearless on stage and in life: a beautiful soul.

Susan was a "broad" by my definition. She was beautiful, talented, loving, kind, feisty, opinionated, goofy, funny, and passionate. I still can hear her laugh.

It seems fitting to close this remembrance with Susan’s own words, shared by directing alum, Leslie Swackhamer (MFA ’90):

I am sharing something Susan wrote to me two years ago, that is just so very Susan. She had been through a very rough patch and was bringing me up to date on her health: "Don't worry about me...you know it has been such a teacher since I got the diagnosis...the whole world began to sparkle every day...and that is how it should be.”