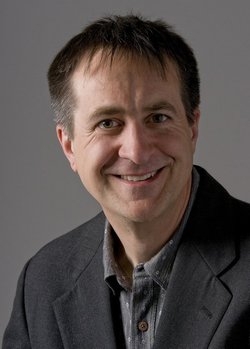 In this edition of The Through-Line, we get to know the two professional staff members that keep our shops performing at a professional standard: Alex Danilchik, technical director and head of the scene shop; and Josie Gardner, head of the costume shop. First up, Alex Danilchik shares his journey from electrical engineering and computer science student to theatre junkie.

Tell me about how you landed at this job at the School of Drama.

I started out as a student here at the university, but not in theatre. I was actually working towards a degree in electrical engineering and computer science. My older sister enjoyed theatre and was the one who suggested that I look at it as something to do on the side. I started by taking a course in theatre construction. Then, during my summers, I started working for Intiman Theatre and other local theatres; just kind of fully engulfed myself in theatre. It very quickly caught me.

As a student, I evolved into someone the School counted on to do props for the shows and was eventually hired in a half-time position. About two-years after that I became full-time. I mostly worked on props, but with my background in computers and electronics, I helped with audio/visual type things as well. I grew up learning how to be a jack of all trades. Just give me a project, and if it’s a challenge that’s even more fun. I think that’s why theatre appealed to me: everything we do is a challenge. It fit me.

The early part of my career focused on props, and then I expanded into set building. My knowledge bank in the shop expanded. Over the course of about 15-years, I evolved into a carpenter in the shop as well as a technical director for shows. My main focus of running the shop, as well as being technical director, has gone on for eight or nine seasons.

It’s not true about every theatre person, but most of us get ourselves into the show and want to see it happen, and we enjoy the challenges. I think that speaks to the type of person that is involved in theatre in general. It doesn’t have to just be the person who is building the sets. You’ll see that—I won’t call it craziness—but that desire to see something come together. And it becomes a team thing. I’ve always looked at it that way. I enjoy knowing that the actors have put in all the time that they have, and the director, and everybody putting their pieces together so that we put our pieces together with the same kind of energy. It shows. In the end you can see it when everyone has put in an equal amount of great energy; all the pieces were put together the right way.

Just give me a project, and if it’s a challenge that’s even more fun. I think that’s why theatre appealed to me: everything we do is a challenge. It fit me.

So, you’ve spent your entire career at UW?

I have. A lot of my time here was only during the school year, so I was off during the summers. During that time, and even when I had free time over school breaks, I’d work on film and television stuff when it was in town. Northern Exposure was the big one.

Can you talk about how you work with the students in the shop?

There’s two parts to that. There’s one: as they’re designing a show. And the other is their graduate assistantships—when they come into the shop to be part of our crew. It’s really enjoyable to watch them come in, sometimes with not much skill, and to be able to teach them how a show is built. For me, it enhances their ability to design a show. It’s always a double-edged sword because you have to be careful to not let how a show is built obstruct your artistic vision. When somebody comes to me with a design that is outside the realm of materials, or whatever it might be, it’s always fun to work with them to figure out how we can make it happen. So we can still get the artistic feel that they want, but within realistic constraints of money or time or materials or whatever it might be. The biggest thing we work on is communication. How are you going to communicate what you want to see? I think that’s an important part of what they learn while they’re here.

We always end up pushing the limits a little bit. Just to keep it challenging, but also to be able to see us produce something that has a little bit of extra energy in it. Besides the challenges, which I enjoy, I think I really do enjoy this atmosphere of people wanting to learn. The students I enjoy are the ones who really embody that. You can tell. They’re saying, “I want to try this to see how it’s going to turn out.” They’re not afraid to learn from mistakes as well as successes.

We always end up pushing the limits a little bit. Just to keep it challenging, but also to be able to see us produce something that has a little bit of extra energy in it.

Do you have a favorite show?

Arcadia was one that, just for some reason, I will always reflect back on and it just worked. Everything about it looked right; it looked sharp. I really enjoyed it visually. From a shop stand point it had a lot challenges, but it came out really well.