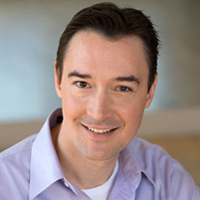 Andrew McMasters (PATP 1995 and current School of Drama Advisory Board member) is featured in the January 2015 issue of the College of Arts & Sciences' Perspectives magazine.

Andrew McMasters (MFA, Drama, 1995) just learned that he got hitched in Vegas. To an inebriated nun. He looks out at a crowd of onlookers who wonder what will happen next.  He’s as curious as they are.

That’s the thrill of performing improvisational theater, where the nun you marry in one skit might be recast as your sadistic high school driving instructor in the next, depending on the whim of the audience. “Improv is immediate,” says McMasters, cofounder and artistic director of Seattle’s Jet City Improv. “It’s exciting. It’s also terrifying, but that’s part of the excitement.”

McMasters’ path to Jet City Improv can be traced back to middle school, where he first caught the acting bug. After studying drama at Temple University, he spent a year working at Atlantic City casinos entertaining customers. “I was a full-on clown, red nose, the whole nine yards,” he recalls. “I was paid to walk around making people laugh. It was great, and actually very good pay. But I wanted to do theater. I wanted to make my own stuff.”

That dream led McMasters to Seattle in 1990, where he joined a short-lived improv group, Train of Thought. He and fellow cast member Mike Christensen founded Jet City Improv two years later, performing in spaces on Seattle's Capitol Hill and Belltown before finding a permanent home in the University District. The theater has been located on University Way, just above NE 55th Street, since 2003.

As Jet City Improv was hitting its stride, McMasters decided to pursue a master’s degree in drama through the Professional Actor Training Program at the UW School of Drama. “I felt that I’d found the limitations of what I could do, and that I was going to run up against this wall until I had a larger bag of tricks,” he explains. He continued with Jet City while completing the demanding three-year master’s program. “The things I was learning in school informed the improv work that I did on weekend nights. Even today, a lot of things I teach are rooted in the work I did at the UW—exercises I worked on in graduate school that I’ve been able to adapt. Without that UW experience, I wouldn’t be as good an improviser, without question.”