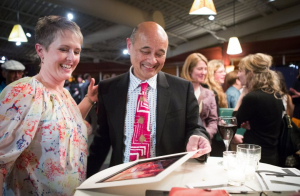 Ruben Van Kempen, with a former student, at a party celebrating his retirement and raising funds to support the Roosevelt High Drama program. (Lindsey Wasson / The Seattle Times)

Where does one begin to add to the accolades and well deserved honors already bestowed on alumnus Ruben Van Kempen? Retiring from more than 35 years as Director of Theatre at Roosevelt High School, Ruben help build what is currently the only full-time theatre program in the Seattle School District. His program is known for the quality of their annual musical productions as well as the student directed one act festival and innovative new works programs with Book It and Seattle Rep, as well as the success of former students who have starred on Broadway, local stages, in business and life.

He has been recognized nationally by the Educational Theatre Association with induction into their Hall of Fame and locally by the professional theatre community’s Gregory Award for Sustained Achievement in Theatre.  Ruben has  been awarded the 2000 Christa McAuliffe Washington Award for Excellence in Education, the 1986 Seattle Excellence in Education Award, the 2004 Butch Blum Award of Excellence and in 2006 the first annual Ruben Van Kempen Arts Educator award.  He also has served as co- director of the WA State Thespians.

Ruben is widely known as an accomplished director in both educational and professional venues as well as a gifted teacher who has the ability to make every student and every cast member feel significant. “I want my students to learn about collaboration, being a team player, a leader, a follower, and making things happen for themselves… I want to give them skills and confidence.” In years to come we look forward to seeing his work around town, both as a performer and director.

BA alumna Beth Madsen Orme (BA '94) has been Van Kempen’s colleague at Roosevelt for over 10 years where she will continue to teach.