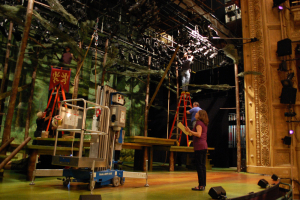 “All those companies that are gone now were the lifeblood for people like me who were just getting out of school,” says Jennifer.

While those companies may no longer be in operation, their legacy continues, and a well-spring of talented theatre artists follow in their footsteps, seen in the recent founding of companies such as The Horse in Motion, Azeotrope, and the now well-established Washington Ensemble Theatre. These companies are the manifestations of the dreams and tenacity of School of Drama students, and this season is full of collaborations between the School, local theatres, and our alumni.

Jennifer is one of the alumni who has been called back to the School to create work and celebrate our 75th anniversary season. Literally, called back to work on Loot with MFA directing student Sean Ryan, opening in December at Meany Studio Theatre.

We recently sat down with Jennifer, who just returned from New York, where she was opening Seattle Children Theatre’s Robin Hood at New Victory Theater. We chatted a little bit about her career and her experience coming back to UW to work on Loot.

You’ve done a lot of work with Seattle Children’s Theatre. What’s that work like?

It’s been a long relationship with the Children’s Theatre and Linda Hartzell [Artistic Director since 1984]. We’ve created many, many, many pieces out of nothing. We take things like Goodnight Moon, with no words, basically, and Linda tells me to go home and live with the book and come back to her with a list of all the things the room might do and how it can come alive. It takes an extraordinary amount of time. We’ll spend over a year working on one piece.

What keeps bringing you back to doing theatre for youth?

I was backstage with [actor] David Drummand sometime after 9/11 and I was questioning if what I was doing was important enough. He’s like 6’8” and I’m like 5’2”, and he looks down at me and he says, “You are changing the world here with these kids. You’re opening up whole new adventures and ideas and possibilities for an entire generation of people; introducing them to theatre; introducing them to ideas.”

Shortly after that, I received a drawing in the mail. This kid had taken the whole show and drawn 10 different scenes in incredible detail. I later found out, with a letter from his mother, that he was autistic. He had come to see the show and this was the first time he had ever reacted to anything in a positive light. And it was like, “Wow. This is what keeps me here.” I’ve had that drawing on my studio wall ever since.

Let’s talk about Loot. Is the process different, working with students and in an academic setting?

I have created my whole process just as if Sean’s a professional director and our relationship has been totally honest and open and on that level. It’s been great. We’ve taught each other lots of things. Since we’ve had the time, the whole thing has just magically unfolded. For instance, we developed the ground plan without even really thinking about it, but with the religious aspects of the play in our minds, and it ended up looking like the front of a church, the top of a cross.

How all the actors relate to and use the set and props is complicated. Sean is a dance person—and I come from dance as well—so it will be really interesting to watch this movement person put it all together.

What are you most looking forward to about Loot and working with the School?

It will be interesting to be here this fall and see how the School has changed and is changing. I got a great education here. I was here during a golden moment, I thought. I’m still in contact with many of my classmates. It will be good to be back inside and check out how things are now.