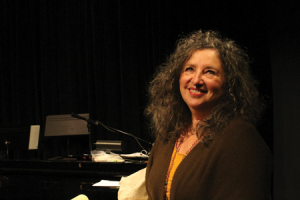 Ki Gottberg, directing her play ‘The Last Salmon’ at The Merc Playhouse. Photo by Claire Waichler.

Andrew Tsao (professor) presented the keynote address for the First Folio Educator Workshop at Seattle Public Libraries on April 2, his talk was titled "Approaches to Teaching Shakespeare to New Generations of Students."

Will Alvin (MFA '09) worked on the design for the Curse of Anubis: Paintball Adventure at Queen Mary's Dark Harbor in Long Beach.

Andrea Bush (MFA '07 and staff) was the featured artist for Five Friday Questions with Encore Arts. Andrea is designing for Stick Fly, part of the Intiman Festival and opening May 24.