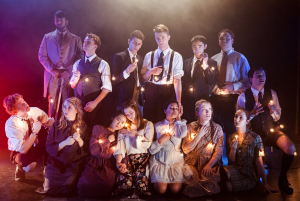 Cast of Spring Awakening. Photo by Eli Gallagher.
Tonight is opening night for the UTS season closer (and possibly their biggest show to date) Spring Awakening. Directed by BA senior Isabel Martin, this rock 'n' roll musical features a cast of 14 undergraduate actors, elaborate design, and a live on-stage band. The production runs May 18-28 in the Cabaret Theatre.
“It’s a show about sex and frustrated desires and inter-generational disconnect,” said director Martin. “The source material was written over 130 years ago, but it feels immediate and reflective of today’s political climate — more immediate than I had hoped it would be when I applied to direct the show a year ago.”
The production is the group’s biggest of the year by far, with about six times the usual budget and a cast of fourteen singers, actors, and dancers. Ticket proceeds from the performance onMay 25 will be donated to Planned Parenthood.
“The show is a warning, a cautionary tale about the dangers of repressing curiosity and passion in youth,” said Martin, “but also presents a deep and profound message of hope — even though all seems dark and cold and lonely in the wintertime, we must have faith that spring and summer will come in time.”
Read about the production on the UW Today Blog.
SPRING AWAKENING
Book and Lyrics by Steven Sater, Music by Duncan Sheik
Directed by Isabel Martin
May 18-28 in the Cabaret Theatre
The winner of eight Tony Awards, including Best Musical, Spring Awakening is what Entertainment Weekly called, "the most gorgeous Broadway score this decade." The show explores the journey from adolescence to adulthood with a poignancy and passion that is illuminating and unforgettable. The landmark musical is an electrifying fusion of morality, sexuality and rock and roll.