I Can See Jersey From My House by Alyssa Karounos 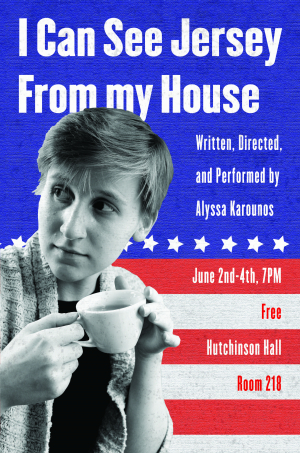 After graduating this June, I will be moving to Chicago to start my new life as a comedian, improviser, and writer. I’ve known for a very long time that I’ve wanted to be a comedian, and so when I had to pick my topic for my thesis for Comparative History of Ideas major, the choice was obvious. I wanted to learn the ins and outs of political satire, the ups and downs, how it affected audience members and how has changed throughout time. Then, the ambitious side of me kicked in, and I remembered my other major. Not only did I want to research and write about my findings as a paper, I wanted to write a play in which I could develop my own audience relationship. I wanted to hone all of the skills I acquired and solidified at UW into one massive research project that produced two separate products: a 35 page research paper acting as my CHID thesis and a 40 minute play written, performed, and directed by myself as my Drama Capstone. The project started as me developing my own story as a political satirist, maybe making some jokes and doing some impressions, and then calling it a day. But it turned into something much more than that. Through my research, I found very troubling things that lead me to second guess all of my plans. All of my research pointed to political satire being a weapon that was used to hurt and harm people, to make them feel worse about themselves and their political ideologies, and even had the power to completely destroy people’s careers. With all of that in mind, why was I making this play? Why was I using this tool that is so destructive for my own work?

The process of writing this play hasn’t been easy, with a new re-write for almost every rehearsal. Being the actor, director, and playwright has made me split my mind into three people, which can get very confusing when Playwright Alyssa tries to stop Actor Alyssa for a new line reading and Director Alyssa has to cut her off. At first, I tackled this challenge on my own. I was wrestling my own demons and needed to face them by myself. But that soon proved impossible. I’ve had so many wonderful people help me in this journey, from my stage manager Sandra Bobman who has been in every rehearsal room, metaphorically holding my hand as I crawled my way through re-writes, to my advisor Karen Hartman who pulled this story out of me, and to all of the amazing collaborators on the production team, to friends coming into rehearsal buying me Vegan Ben & Jerry’s ice cream. Right now this play is a conversation that I have been having with myself for a long time that I can finally open up and invite others into. I no longer have to hold political satire’s secrets to myself anymore, I can let them free. I can offer questions, I can provide analysis, and I can be vulnerable about my own second guessing. I am so proud to welcome people into this play, and offer questions about political satire that we don’t ask often enough, and enter a territory of complete fear: was any of this worth it?

I Can See Jersey from My House
Written, directed, and performed by Alyssa Karounos
June 2-4 at 7:00pm
Room 218, Hutchinson Hall

For the past year I have been researching political satire and its effects on the audience. And what I found hasn't been very easy to digest. If political satire has such a negative effect on people, is it even worth making?