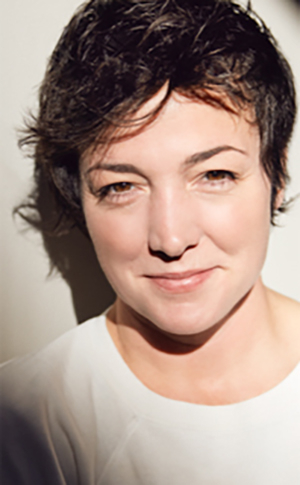 The UW School of Drama is thrilled to welcome Libby King to our faculty. Libby will begin her appointment in the fall of 2020 as Assistant Professor of Acting, Directing & Devising.

"I met Libby nearly 20 years ago through SITI Company," says Jeffrey Fracé, Head of Acting, "and I’ve been following her work ever since. She is one of the most compelling actors I know, and the characters she creates are always complicated, multidimensional, intriguing, and disarming. She’s worked on some of the world’s most notable stages, and she still loves to dive deep into new work in the small and scrappy studios. She just exudes creativity and warmth, and I can’t wait for our students to work with her."

Libby is a queer actor, writer, and mom who is based in Brooklyn and has been working professionally in New York and abroad for almost 20 years. She has been a member of the acclaimed theatre company the TEAM (helmed by Tony award winner Rachel Chavkin) since 2006. With The TEAM, Libby has helped author and perform in four award winning published works: Particularly in the Heartland, Architecting, Mission Drift, and Roosevelvis. She is currently creating a role in the TEAM’s upcoming show RECONSTRUCTION (Still Working but the Devil Might be Inside). Libby was set to have a busy Spring/Summer ’20 performing in back to back New York premieres – The Antelope Party by Eric John Meyer and Preparedness by Hillary Miller - both were put on hold due to the pandemic. Libby has worked in a lot of special places and spaces the Public Theatre, BAM, PS 122, The Bushwick Starr, The Vineyard, Classic Stage Company, Judson Church, St. Marks Church, Royal Court, National Theatre, Almeida, Barbican, Traverse, Royal Lyceum, ART, ACT, the Walker, OTB, Lisbon, Coimbra, Salzburg, Glasgow, Toronto, Calgary, Edinburgh, Dublin, Galway, Baton Rouge, Ann Arbor, Philly, Nashville…some special ones to note: Men on Boats (dir. Tamilla Woodard), The Laramie Project Cycle (dir. Moisés Kaufman), 27 by Abi Morgan (dir. Vicky Featherstone), Death of a Salesman with Siti Company (dir. Leon Ingulsrud), Theatre of the Mind with 600 Highwaymen and David Byrne, Uncle Vanya (dir. Rachel Chavkin), Patti & the Kid (dir. Libby King and Frank Boyd). Libby loves to teach. She’s taught hearts at NYU, the New School, PACE, Sarah Lawrence, Vasser, LSU, + Vanderbilt University. She is currently the voice of the Whitney Museum. Libby played division 1 soccer at Clemson University where she received a degree in History and received her MFA from Louisiana State University. She comes from Nebraska.