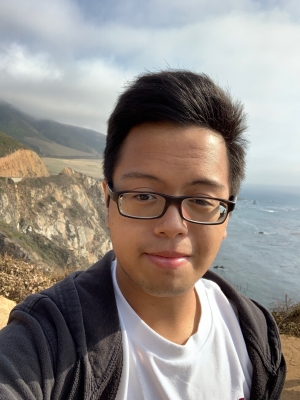 Sam Quiambao (he/him) is a senior studying drama and informatics with a focus on human computer interaction. He transferred to UW from South Seattle College, intending to study computer science. When he didn’t get into CS, he found himself without a backup plan. But, remembering how much he enjoyed a high school theatre course, he enrolled in Intro to Acting and rediscovered his love for theatre. Sam is now a core member of the Drama community, serving as the Executive Director of the Undergraduate Theatre Society and working as the School of Drama's Engagement Assistant. Read our interview to learn more about how Sam hopes to use his informatics degree to help build a more inclusive future for theatre.

How did you get involved in Drama?
I came here to UW hoping to be a computer science major, but that didn’t happen. However, when I was building my schedule, I saw the acting class Drama 251, so I changed my schedule so that I could take it. So, really, that starting point of Drama 251 was the spark. Then I got involved into UTS [the Undergraduate Theatre Society, a student-run group] and I did a few productions. So yeah, that's really how I got into studying drama.

Do you remember what it was about that first class that made you feel like this was something you could really get into studying?
I think it was really just the freedom of it—the playfulness and being myself. I was and I still am a shy person, and I didn't really have a lot of social interactions back then, but taking that class really helped me open up and know myself more. That space helped with that opening up.

What do you know now that you didn't know when you started at UW?
I had this clear view of a plan of where I wanted to be before I transferred you to UW. I was like, yeah, I'm gonna study CS and then like 2 years from now I'm going to graduate and have a job working as a programmer. But that totally changed when I didn't get into CS. It’s funny because I didn't expect to be studying drama, but at the same time I didn't know why I wanted to be a CS person. I was just doing it because it's something that I took in community college and I didn't know what else to take. But this journey of going to drama and then now going to informatics—it’s just weird how life is. I didn't expect drama to jumpstart my interest in informatics, but drama is part of the reason why I have an interest in UX design.

Can you say more about that?
I found purpose because I wanted to help the theatre community in progressing diversity and accessibility and inclusiveness. 'Cause theater is—I mean I'm not an expert at this—but I feel like theatre is very white, right? Like, there's a lot of white people involved.

You don’t have to be an expert to notice that.
[Laughs] Yeah. So, I want to help theatre progress more in handling that, like making it more diverse and inclusive to everyone. And UX has a lot of skills that are transferable to that, like with user research, right? Like understanding why people color are not pursuing drama or theater would help with continuing that progress.

What is your favorite thing about studying theatre?
It's just really about how free I can be in the rehearsal room and on stage. Again, I was a really reserved person, so theatre really helps by providing the space to just be myself and try new things right and be okay to fail.

If you could dispel one misconception that people have about theater what would it be?
I feel like there's some misconception that acting is really easy. You know, it's just memorizing lines, and then you just say it with some emotion, and then suddenly you're an actor. There's more to it. There's a story behind it. There's countless hours of rehearsals and failures of trying out different lines and trying out different scenarios, different back stories, right? So, I just feel like people who would say acting is easy, they should try it. If they study it, maybe they'll understand that it's not just memorizing something and saying it out loud and then putting some emotion behind it. And it's hard to put emotions behind it, right? You have to know the story behind it, to get to that emotion. You can’t just be like, “I'm going to say this.” I mean, you can do that—

I think that your experience about coming to UW intending to be a CS major and then not getting into CS is not unique, right? Like that happens a lot. We know there's a lot of students who come to UW to study in a really competitive major and then they don't get into that major and then they're kind of floating around, like what am I supposed to do now? Do you have any advice for somebody who's in that situation? Was it scary for you? How did you reground yourself and figure out what it was that you wanted to do?
It's hard to answer that question just because I feel like I got lucky in discovering drama. But I think before you go to UW you should research about the competitive majors and you should be okay if you don't get accepted and have a backup plan. I definitely didn't have a backup plan, so it could have gone very wrong for me. But again, I got lucky to find drama. You could try going my route and join several RSOs that you have some interest in, and maybe you can learn about the department through that. There’s a lot of majors here that are open that people don't know about. And just asking the advisors about that, too. With the general advising for transfer students, they are great, but they're generalized, right? They not specialized in one department. So talking to the advisors in different departments will really give you more insights as to how the department is. Eloise [Boyle, UW Drama’s undergraduate advisor] is really great. She's provided me a lot of helpful resources throughout my time here.

You say that you got lucky, and I see that you did get lucky because you found something that you love, but also you made a choice to register for an acting class and you arranged your schedule to make that possible. You did make a choice. It's not like you fell backwards into an acting class. There was something that told you that this might be something, and it takes courage to follow that instinct even if you don't really know where it's coming from and why.
Yeah, it was more curiosity for me. I did take a theatre class in high school, and then I forgot about it while I was in community college pursuing STEM stuff, and then when I saw acting as one of the courses here I was surprised, like, “Wow! That exists?” So I tried it.

So maybe there's a piece of advice in there for people who feel lost or who didn't get into the major that they thought they wanted, about thinking about things from when you were younger that made you happy, that lit you up, that sparked some kind of curiosity. ‘Cause sometimes we get on to a track and we’re like, “Well, this is who I am now.” But everybody is so many different things.
Yeah. I would also like to study psychology, but it’s hard to explore all the majors. I mean you could stay at UW for 20 years and just keep taking different classes.

Yeah. Well, there’s a lot of psychology in acting.
Yeah.

Tell us about your capstone project.
Well, it’s going to happen next spring and it’s going to be about the various experiences of Filipino LGBTQ+ members in the community. What I'm trying to do is gather data about experiences and see if there's some patterns and focus on that. And it’s solo performance. I will be researching it, writing it, and performing it.

Why did you choose to do this project?
I was thinking about topics and trying to come up with something where I felt like there would be resources in the community—people I could talk to, for example. And I have a personal connection to this topic, as a gay Filipino. In a way, I guess I’m also thinking about this piece as another part of my coming out process. I’m curious to know how ideas about LGBTQ+ people are changing and evolving in the Filipino community. I want to make something that reflects the experiences of my fellow LGBTQ+ Filipinos. That is who it’s for. But of course, I want everyone to come and watch my capstone.