UW Drama shines a light on Rosalind Franklin, scientist who unlocked the secrets of DNA 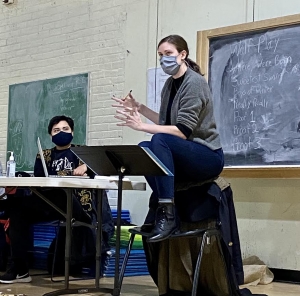 Rosalind Franklin knew that she would face resistance as one of few women scientists in her field. And yet, she did her work anyway–unlocking the secrets of the DNA molecule and forever changing the study of molecular biology and genomics. It’s a story that captivates Amanda Rountree, second-year MFA director at the UW School of Drama. This winter, Rountree directs Photograph 51, a play inspired by the remarkable scientist.

“Franklin chose to be bigger than the negative voices in her way, even when she was excluded from dining with male colleagues, even when people condescended her in unimaginable ways. She still showed up to work in these male-dominated spaces as a woman—as a Jewish woman, in fact.”

Almost 70 years after Franklin’s discovery in London, women scientists in both the United Kingdom and the United States still face major barriers. Women comprise approximately half of the workforce in both countries, yet make up only 26-27 percent of STEM workers.

The UW Girls in Science program, Women in Science & Engineering (WiSE), as well as Decolonizing Science (a podcast created by PhD biology student Ashley Paynter) are just a few efforts happening in the University of Washington community to address systemic inequities in science.

At the UW School of Drama, students are preparing to contribute in another way: illuminating a story that’s about science, but important for anyone with DNA. Only Franklin’s male colleagues received credit for deciphering the density structure of the DNA molecule for many years. Only after Franklin’s death did her work become more widely known.

“I think that there are, and have been, many Rosalind Franklins in the world—unsung women and untold stories,” Rountree said. “It’s great to see her story getting more attention and recognition.”