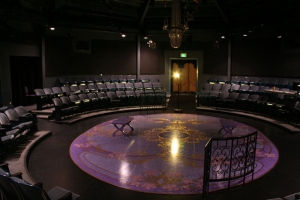 Come see our graduating actors present their final works as UW students. The third-year solos shows, written and performed by the actors of the PATP class of 2021, are the culmination of three years of hard work. Come and see what they've cooked up as they prepare to enter the professional world!

This performance will be available to stream March 5-14. RSVP to receive the link opening day!

Hand Me the Sword: A Modern Fairytale
Written and performed by Asialani Holman (she/her)

The days of princesses and knights in shining armor are long past. Now we’ve got boozed up bad bitches and Chad’s just looking to score, and all of them are a bunch of depressed, self-loathing messes! When Asialani, a young woman with a broken heart, encounters her own inner demons, she must find a way to overcome them, whether it’s booze, boys, or kicking some ass.

The Best Show Ever, Humbly Speaking
Written and performed by Erica Matthews (she/her)

Erica has spent the past three years developing the skills needed to be a successful storyteller and now she’s ready to show the world! She guarantees that this show has everything you would want to see — special lights, astounding music, a stage curtain, a great actor, a lovely costume, the perfect story arc, and beautiful language. She’s absolutely sure YOU’LL LOVE THIS SHOW. And if you don’t, she’s even willing to give you a full refund.

Arturo Vivas wants to become the world’s greatest wrestler. When a once in a lifetime opportunity comes along, he sacrifices his life as he knows it to chase his dream. However, when things don’t go as he planned, he begins to rethink what matters most to him and is faced with the question — what is his true destiny?

Martin Tornincasa is a homeless man with nothing left but what he can carry on his back and the delusion of his pet dog, Oatmeal, who is no longer really with him. Can he finesse a way to change his stars when he stumbles upon what could be his key back to a semblance of the life he once lived, or will he be overcome by all of the obstacles in front of him?

Vetter has been trying to leave her serving job since the moment she was hired. Four (plus) years later and that day has finally come, but first she'll have to survive one more Sunday brunch shift.

*86 is a mostly autobiographical piece about the industry that kept me afloat financially, broke me down spiritually, and spurred the self-reckoning that got me to this very moment.