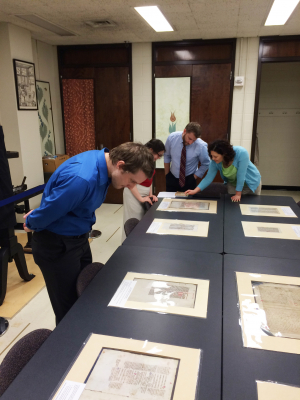 “You’re getting a PhD in the theatre? …are you, like, an actor?”

“No,” I say, without dropping my smile. I’ve had practice with this response. You can tell: for example, I never, ever use the word “dramaturg” in the sentence, however accurately it might describe what I used to do for a living. “I used to be a director, but then I decided to go back to school. I’m a scholar: I study medieval and early modern drama.”

At this point, the faint look of bemusement on my interlocutor begins to fade into boredom and disappointment. “Like Shakespeare,” they say, their voice trailing off. Their response is ironic, because I think Shakespeare is boring and disappointing. “Sort of. Mostly before him, though,” I respond. At this point, my spooked interlocutor usually scuttles off to find the nearest wine (at best) or any other person they can eyeball up and be reasonably certain is sane (at worst). My mother made it slightly longer when we had this discussion over the phone, but I’m pretty sure she was also wrestling with a TV remote, trying to watch a re-run of Downton Abbey. I even get it a bit from my colleagues, most of whom study theatre more oriented towards 2016.

Which is sort of a shame, because I have a lot of fun doing what I do. The manuscripts I have to look over are full of the doodles of bored monks, like battle-armed knights dueling snails or monkeys using chamberpots, or their distinctly unholy complaints, like the monk who appended “Now I’ve written the whole thing: for Christ’s sake, get me a drink” to the end of his manuscript. Would that their comments on performance techniques in Cycle Plays were so strikingly vivid.

I have a lot of fun doing what I do. The manuscripts I have to look over are full of the doodles of bored monks, like battle-armed knights dueling snails or monkeys using chamberpots, or their distinctly unholy complaints.

Not too long ago, I had a chance to introduce my colleagues to some of these moments. In collaboration with UW Library’s Special Collections, my fellows in the UW Medieval Studies Graduate Interest Group—a consortium of graduate students from schools and departments all over campus, like the English department, Music, East Asia Studies, and Classics—put on a workshop for Paleography and Codicology. Paleography is the study of old forms of writing; Codicology is the study of how books (or codices) are put together.

At the event, we were able to see pages of manuscripts in the Special Collections from 1200 CE up until about 1600 CE. Single pages like these are often sold separately from the books they were prepared for, often when the books are torn apart of otherwise destroyed; generous donors purchase the leaves and provide them to UW Libraries. With them, we were able to see the way the written form developed over the course of half a millennium. Older pieces, for example, WERE WRITTEN ALL LIKE THIS. Lower-case letters, called miniscules, were only developed in the Carolingian period, or about 800 CE or so. They took up less space in the manuscript and were easier to read.

Few, if any, of the manuscripts were totally in English, so we had to figure out what languages they were in. Our cohort from the School of Drama was particularly useful for this: between us, we could recognize Latin, Ancient Greek, Old French, Occitan, and German, all of which we found in the manuscripts. Special Collections even provided us with the same page from two different editions of the same text (called The Nuremberg Chronicle, from 1493): one in German, one in Latin. We learned, for instance, that the rulers of Egypt were known as pharaohs. Each pharaoh, the text stressed, had his very own name.

We moved from hand-written, hand-decorated collections of psalms and books of hours (books to tell you what and how to pray at any given hour of the day) into what are called incunabula, or the first generation of printed books, like the Nuremberg Chronicle. They get their name from the Latin word for “cradle.” The purview of these newer texts was much wider—how to behave in public (“try not to scratch your [rear-end] too much in front of the bishop,” advice this fellow apparently never got wind of), how to address a Papal Legate, how to haggle with Flemish tapestry salesmen or Burgundian wine merchants. All these reflect the widely expanding cultural horizons of Western Europeans at end of the Middle Ages. They also show the first experiments with the new technology of the printing press—one of which was in the room with us. These early printed materials also saw the first editions of Greek and Latin Classical works, texts few people had seen in almost a thousand years.

It was sometimes the imperfections of the texts that were most eloquent and touching. There were greasy fingerprints from thoughtless readers somewhere in history, dog-eared pages that marked a section of interest to a long-dead reader, and gaps where pages were torn out, the reason why as unknown as the identity of the perpetrator. In many of the texts, there were bright red stains through several pages on the center of the book. After seeing the third or fourth incident of that, one of my colleagues stroked his beard and squinted his eyes, knowingly. “Blood,” he said. One of the librarians smiled. “No,” she said. “Flowers.”

It was sometimes the imperfections of the texts that were most eloquent and touching. There were greasy fingerprints from thoughtless readers somewhere in history, dog-eared pages that marked a section of interest to a long-dead reader, and gaps where pages were torn out, the reason why as unknown as the identity of the perpetrator.

We got to try our hand at transcription, too: we each were given a page to decipher (“Is this ‘Ulm’ or ‘We’ or maybe ‘Owl’?”) and write down on our own paper, simulating the actual experience of our scholarly ancestors.

And so, for a little while at least, before they returned to their academic homes in dramas of 18th century Germany or 21st century Alaska or 17th century Turkey, my colleagues were able to join me in my little corner of the (medieval) world.

The Medieval Studies Graduate Interest Group—members of the School of Drama PhD program, included—presented an event called “Whan That Aprille Day” on Friday, 1 April 2016, from 2:30 to 4:30 pm, in the Reference Commons in Suzzallo and Allen Libraries. It was in celebration of the Middle Ages through the lens of Geoffrey Chaucer and his Canterbury Tales, which is set on 1 April, when “ram is half his cours yronne.” There were tutorials in Asian calligraphy, pronunciation lessons for Latin and Middle English, and the School of Drama used volunteers to work through the problems with staging the notoriously difficult-to-stage Croxton Play of the Sacrament, from the mid-15th century.

Many thanks to Sandra Kroupa, Book Arts and Rare Books Curator for UW Libraries, the rest of UW Libraries Special Collections staff members, Brian Hardison, and our fellow members of the UW MSGIG.