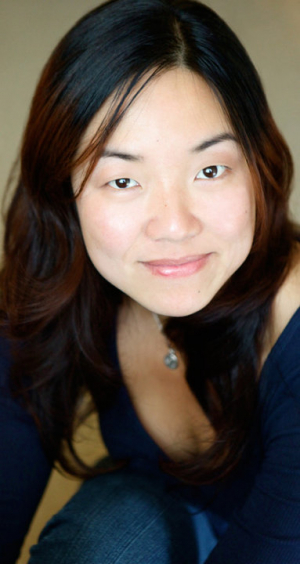 Desdemona Chiang (MFA Directing 2009) has racked up a serious number of directing credits and awards—most recently the Vilcek Prize for Creative Promise—since graduating from the University of Washington School of Drama. She spent the end of March back here directing a new play workshop for Clarence Coo’s People Sitting in Darkness, after which she headed down to Ashland to start directing The Winter’s Tale for the Oregon Shakespeare Festival. Desdemona took the time to sit with us and talk about her career path, working with playwrights, and the craft of directing.

How did you come to theatre?

I started off as a biology major at Berkeley and I really had no intention of joining the theatre. I had to take an arts requirement my first year, and someone recommended a class called Intro to Acting, saying that it would be the easiest class I would ever take. So I took Intro to Acting and it was indeed the easiest class I ever took, but it was also the first time I experienced play and vulnerability with a group of strangers. That Intro to Acting class was the first time that I found a community of people that I connected to really well and felt a sense of belonging. I wasn’t connecting with people in science in the way I was connecting with people in theatre. Two years later I took a directing class and it all suddenly made sense for me—this is where I want to be in the theatre. I got to read plays. I got to make decisions. I got to be bossy. I thought, “Yup. Sign me up. I want that job.”

Did you find yourself working in theatre after earning your undergraduate degrees?

When I first graduated I chose not to do theatre because of obvious pressures around career and financial stability. It was the beginning of the dot-com boom and I was doing work in new media, designing websites and working in the tech industry. It was great to have a steady paycheck, but also pretty miserable because I wasn’t doing the thing that made me happy—the thing where I was connecting with people. I wanted to do a play again, so I auditioned for Impact Theatre, a small guerilla style basement fringe theatre in Berkeley. I was cast in a production of Macbeth where we had strawberry jam as blood and brains and we were throwing it everywhere. It was silly, but also so liberating. I felt more alive doing that crazy stuff than I ever did in a laboratory. I asked the artistic director if I could assist her with the next play, and after that I became one of the resident directors for a few seasons, which is when I decided to apply to grad school. I thought that if I wanted to do this professionally then I should get more training, go to an MFA program and have that rigorous, intensive, hard practice and learn the craft in a deeper way.

I felt more alive doing that crazy stuff than I ever did in a laboratory.

How did you transition to the professional world after grad school?

I was vigilant about applying to internships and fellowships after graduate school, and I was lucky enough to land a few things out of town. The Drama League Director’s Project was a big step in my career development. It is a professional program that hooks you up with two assisting gigs at regional or New York theatres, so that you can work closely with an artistic director. Hopefully, you form a connection with that individual or that theatre that ends up growing and becoming a rich relationship. I was fortunate to have gotten paired up with Joe Haj at Playmakers Repertory Company in Chapel Hill, NC. Playmakers has become another stomping ground for me (I’m going to be directing my fourth show there this fall), and Joe has become a friend and colleague whose amazing career I continue to follow and admire.

How did you come to found Azeotrope?

Richard Sloniker (PATP ’09) and I were in the same graduate class at UW, and we hit it off pretty well as pals but didn’t get a chance to work together very much while in the program. He had read a play, Adam Rapp’s Red Light Winter, that he was very interested in. So we pooled our pennies together and produced it with him acting and me directing. Over time, we agreed that we’d work together to look for stories that were urgent, necessary, and untold. What are the lives that we don’t see on stage, but exist everywhere that we don’t notice? That became our lead impulse—it became about making the invisible more visible.

You’re here directing a new play workshop and reading with Clarence Coo and his work People Sitting in Darkness. How is working on a play with a playwright who is present different than directing a completed play?

I love new play development processes. I love working next to the writer. When you have the playwright in the room there is a chance to have influence and interrogation around the play. The playwright has an idea and my job is to ask the writer: What do you want to do with the moment; how do you want to realize this moment? The best collaborations are with writers who are willing to have that open and frank conversation about the work. Once the play is done, there’s little room to ask the why and how. The playwright has already been through several versions of the why and how with other directors. Now it’s your job to justify the why. These are two different processes and they’re equally satisfying in different ways.

I met Clarence in San Francisco about four years ago through the Bay Area Playwrights Festival in San Francisco. He’s someone I wanted to see more of in the community and nationally. His writing, for me, is so pure. There’s something so earnest about Clarence’s voice. It’s not clever or sassy. It’s so full of want: I’m a little person in a big world and I have big hopes and dreams. We don’t write like that anymore. I think he’s excited to be here and I’m excited to have him here. It’s been a really great experience.

When you have the playwright in the room there is a chance to have influence and interrogation around the play. The playwright has an idea and my job is to ask the writer: What do you want to do with the moment; how do you want to realize this moment?

Do you have a lesson or memory from your time at UW that really sticks?

A lot of my sticky memories are of Jon Jory (former faculty). During my first year, he said to me, “Desdemona, you’re a good director, but you’re not an artist. You’re just a really good theatre worker. A genius and artist is someone who can change the field they’re working in.” I’ve carried that with me for a good chunk of my directing career. Maybe one day I’ll invent something in my field and take my craft in a new direction. For right now, that realistic view of where I am in the ecosystem as a really good theatre worker has helped me by taking a lot of pressure off. I’m a theatre worker. I make plays. I take things on paper and I work with people to make that thing on paper look like something with people in it.

The definition of an artist is complicated. I don’t know if I’m totally on board with the idea that you have to be a genius in order to be considered an artist.

One thing I keep milling over is: Do you have to suffer to be an artist? Is good work predicated on an understanding of suffering? To what extent does one have to have problems in real life to be able to represent problems on the stage? It’s something I don’t know and a question I constantly ask.