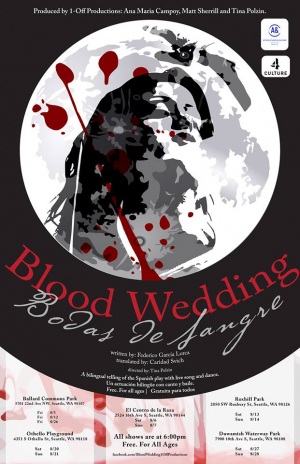 David Morden (PATP '93) is the voice/text coach for Santa Cruz Shakespeare this summer, as well as directing the intern production of Orlando.

Tina Polzin (MFA '15) is producing and directing Blood Wedding/Bodas de Sangre, which will be performed at Ballard Commons, Othello Park, Roxhill Park, and Duwamish Waterway Park in Seattle during the month of August. It will be performed in Spanish and English with live music and dance.

Ben Gonio (PATP '05) will be participating in the next phase of ACT Theatre's workshop ofThe Tale of the Heike, beginning this August.

Moises Castro and Claire Fort (PATP '16) performed in Milton-Freewater, OR in the fourth installment of PearlDamour's Milton project.

Rachel Perlot (BA ’16) is currently serving as the Acting Managing Director of The Seagull Project.