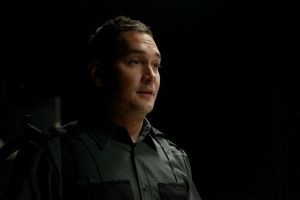 BR: Can you tell us a little bit about this play?

RNS: Trojan Women is a contemporary re-telling of the Euripides epic by the talented Caroline Bird. What I really enjoy about Ms. Bird's text is her use of language. It's not overly poetic but it does have a lyrical quality that makes her words easy to speak, the text rolls out of your mouth like a beautiful song, even though what the characters are saying is quite, quite grim. The language she's chosen makes the telling of this story extremely relevant, which should be the hallmark of any good production.

Most problems we're facing, including our current political struggles, are reflects in the Greek works.

BR: What is the most exciting element about working with other UW School of Drama graduates?

RNS: Working with other UW actors is a treat! Even though it's been a few years since I've trained with UW professors, there are fundamental concepts that us actors employ in the rehearsal room that we all share. It makes for a great launching point for scene work...we're a couple steps ahead of the game.

BR: Why do you think it is meaningful to look at Greek plays and stories in context of today?

RNS: The Greek plays are pedagogically important since they are the foundation for much of western theater, but I'd argue unless there's a deliberate attempt to produce a play with contemporary relevance, you're staging a heritage play, and there's really no reason for that in my opinion. Most problems we're facing, including our current political struggles, are reflected in the Greek works. We should pay close attention to what came before us to learn how to avoid similar pitfalls. Will we succeed? Who knows, but our attempt in surmounting these eon's old evils is significant and shouldn't be overlooked.

I'll always fight for the greater good. Will I win? Maybe not, but my attempt is worth something.

BR: What do you hope the audience will take away from this production?

RNS: I hope the audience understands that war sucks. It really sucks.  And I think they do, or at least I hope they do. There is UNIMAGINABLE suffering I can't even fathom as I sit in my well-heated house in Seattle, typing on my iMac, after just finishing coffee and a toasted bagel, while a good number of American citizens and an incoming Presidential Administration are actively turning our backs on war refugees.  We feel so enlightened and well-meaning in our liberal lives, thinking by sharing a Huffington Post article and "liking" our friend's links we're doing the good work. I hope this play causes patrons to take action. Take physical action that has an actual consequence to aid in the greater good, because many of our fellow human beings are suffering, they are dying, especially the most venerable: women, children, the poor and marginalized. There's a speech in the play that resonates with me. The actor who plays the CHORUS says, "Troy was a painful place. I never felt safe at night but the buildings rose up like beacons and if you were struggling, if you were poor, it was never Troy's fault. Troy was utopia and some of us weren't utopian enough."

I'll always fight for the greater good. Will I win? Maybe not, but my attempt is worth something.