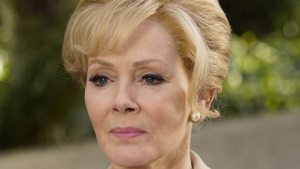 "Jean Smart has been a television staple since she was a member of the original cast of hit CBS sitcom Designing Women in the late ’80s. In an unusual turn, she left the successful show five years in and has gone on to an often-surprising TV career, with her roles ranging from a 24 first lady who conspires to undermine her corrupt husband to Emmy-winning performances on sitcoms like Frasier and Samantha Who? Now she’s about to take a departure into the world of sci-fi and fantasy, joining the cast of Legion, FX’s entry into the X-Men universe. The show is helmed by Fargo’s Noah Hawley and stars Dan Stevens as Charles Xavier’s powerful telekinetic son, with Smart’s character, Melanie Bird, billed as an unorthodox therapist. (It premieres next Wednesday, February 8.) At the recent Television Critics Association winter conference, Smart sat down with The A.V. Club to talk about the highlights from her long TV career and the changes she’s noted in the industry.

The A.V. Club: Twenty-six years ago, you left Designing Women because you said you wanted to do other things. Do you remember what kind of things you were looking for?

Jean Smart: You become an actor because you don’t want to do the same thing all the time. [Laughs.] And you find you’re doing this show that is a really, really cushy 9 to 5 job. Not even 9 to 5. And after five years you start to feel like, “Maybe I need to get back to work.” Because I came from the theater, and so I was used to doing different things all the time, and it was time to go.

AVC: Do you still do theater?

JS: You know what, not as much as I would like, because I have two kids. I love the theater, and I did tons of theater before I ever did anything in front of the camera, but I haven’t done anything in New York in a while, and I really, really want to. I’ve been offered a few things, but it’s got to be something that works, because it’s so disruptive to the family that it’s got to be something that I cannot turn down."