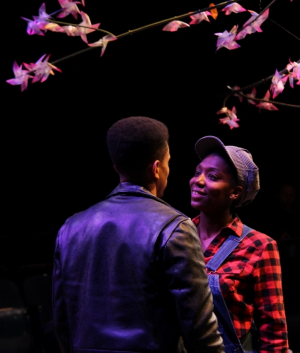 Porscha Shaw and Allen Miller in As You Like It. Photo by Isabel Le.

We had a wonderful first weekend of William Shakespeare's As You Like It, directed by School of Drama Associate Professor Jeffrey Fracé. Come experience this wistful, sci-fi, and rocking world of one of Shakespeare's most popular comedies.

"Think you've seen Shakespeare? UW Drama flips it on its head! Their production of As You Like It is a must-see!" - Audience comment

Make sure to grab your tickets soon! These puppies are selling like hotcakes!

Funny, melancholy, and anything but sentimental, As You Like It is often unfairly branded as a silly pastoral romp. Director Jeffrey Fracé puts that notion soundly to rest, reimagining Shakespeare’s tale of exile and transformation for 1950s America (with a Sci-Fi B-movie twist). Layered with original Americana tunes, this is a pot-stirring rendition of the classic story of Rosalind and Celia, two cousins who run off to the forest to escape convention. Fun, frisky, and sometimes over-the-top, the show reminds us that life is short, so we’d better love one another as best we can, as long as we can.