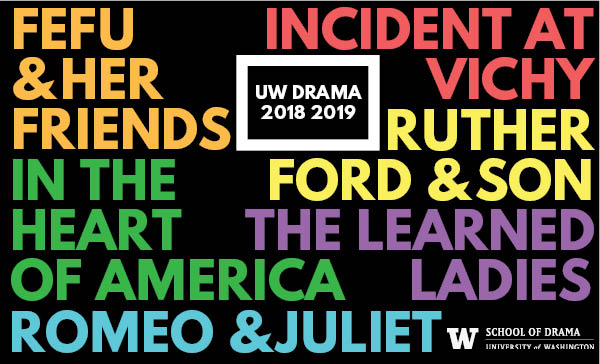 “In the course of their time here our students are called to work on as many different forms and styles of dramatic work as possible, and what I love most about our audience is how much they enjoy being on that journey with them,” says outgoing Executive Director Todd London, who led the planning for this coming season for the final time before stepping down from his post to return to New York City. “So, this season you will get to see everything from detailed contemporary naturalism with Arthur Miller to 17th century French satire with Molière. You’ll get one of the most unflinching political playwrights of our time, Naomi Wallace, and British playwright Githa Sowerby, whose work, despite being transformational one hundred years ago and startling timely today, has been almost totally forgotten. And then, you will experience the vastly different works and worlds of the most influential English-language playwright of all time, William Shakespeare and one of the most influential of our time, María Irene Fornés.

“All of these plays are dealing explicitly with ‘men’s spheres’ and ‘women’s spheres,’ with how gender is constructed and taught, and with the human need to challenge those strictures and build a more fluid world. It feels just right for this particular moment, and we are thrilled to share it with our community.”

CLICK HERE TO BE NOTIFIED WHEN SINGLE TICKETS AND SUBSCRIPTIONS GO ON SALE IN EARLY SEPTEMBER.

Guest Director Kelly Kitchens, who is well-known to local audiences for her work at Seattle Shakespeare Company and Seattle Public Theater, among others, directs an all-male cast in our season opener. When it premiered in New York in 1964, The New York Times called Incident at Vichy “one of the most important plays of our time.”  The questions at the heart of this story—about evil, complicity, self-preservation, and the death of human decency—are perhaps more resonant now than at any time since that first production. In a makeshift police station in 1942 France, a group of men plucked off the street try to figure out why they are there and what fate awaits them behind the interrogation room door, as ominous reports of far-off camps and prisoner-packed cattle cars begin to circulate. By the end of this taut, gut-punch of a play, Miller's ethical barb has pierced us all, compelling us to look inward and ask what we will do when the most depraved human impulses become commonplace, how we will respond in the face of "an ocean of vulgarity."

Professor Valerie Curtis-Newton directs an all-female cast in María Irene Fornés’ Fefu and Her Friends. Fornés, the winner of nine Obie Awards, including the award for sustained achievement, has been called “the most important American playwright you’ve never heard of,” and “influential beyond measure.” The 87-year-old iconoclast, beloved teacher and mentor to some of contemporary theatre’s most exciting writers, is the subject of the new documentary The Rest I Make Up, and 2018 marks a national celebration of her work. Fefu and Her Friends, Fornés’ most celebrated work, turns the “ladies who lunch” trope on its head, bringing together an extraordinary—and regular—group of women who, over the course of a weekend in the country, peel away at each other’s layers, uncovering both the horrors and felicities of contemporary womanhood.

In 1912, a new play by an unknown female playwright took London by storm. Originally scheduled for only four performances at London’s Royal Court Theatre, Rutherford and Son by Githa Sowerby quickly transferred to the West End, receiving its New York premiere within the same year. Despite its initial success, Sowerby’s shattering drama of family business soon faded into obscurity, and more than half a century passed before it was produced again. Indeed, UW Drama will only be the third company in the United States to ever present this transformational work of contemporary drama. Be assured, time has only sharpened Sowerby's withering, feminist excoriation of the golden age of patriarchy, and the scheming, backstabbing family life that one patriarch wrought—The New York Post called a 2001 production "alive with human passions and tyrannies." The Kardashians ain't got nothin' on the Rutherfords.

In the shadow of the Gulf War, a young Palestinian woman's quest to learn what happened to her marine brother, Remzi, leads her to a Kentuckian marine named Craver. Through a poetic web of time leaps and apparitions, we see the two soldiers fall in love against the backdrop of war. Woven into that story, the ghost of a Vietnamese mother, Lu Ming, seeks justice for her infant daughter, a victim of the 1968 massacre at My Lai. Obie Award-winning Playwright Naomi Wallace, known for her signature blend of politics, eroticism, and lyricism, here masterfully rings the gong of histories that still reverberate through our national body.

What if your first love was someone you’d been told to hate? The most famous love story in the English language is not just a love story—it's also a tale of young people attempting to repair the damaged world their parents have offered them. Will their explosive love spark a revolution, or will discord, violence, and unspeakable tragedy continue to rule? UW Drama Associate Director Geoff Korf directs this gender fluid production of Shakespeare’s story of the destructive power of binary factions, and the transformative potential of youthful passion.

The Parnell sisters don’t always agree. Armande is seeking a life driven by intellectual pursuits, while Henriette wants to follow her heart. Add a set of overbearing parents, some meddling relatives, and a few pompous poets, and you’ve got one of Molière’s most ridiculous farces. Jane Nichols, an internationally renowned teacher of physical comedy and Clown, directs this funny, philosophical play that pits the power of the mind against the passion of the heart. Pulitzer Prize-winning poet Richard Wilbur translates this sparkling version of Les Femmes Savantes, in which, in Nichols’ words, “every character is delicious and every scene is a pearl.”