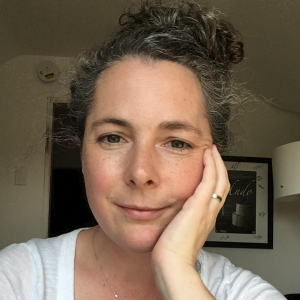 Holly Arsenault is a playwright and arts administrator. She was the director of TeenTix, a nonprofit organization dedicated to ensuring equitable arts access for all teens, from 2005 to 2016. Holly helped TeenTix grow from a small, city-sponsored program into an independent organization and a nationally-recognized model for youth arts engagement. You can learn more about TeenTix at www.teentix.org. At the UW School of Drama, Holly supports students, faculty, and staff through marketing and communications, with the goal of making the School of Drama a place where every UW student can feel a sense of belonging.

Holly made Puget Sound Business Journal's 2015 '40 under 40' list and was named a 2016 Superhero for Washington Families by ParentMap magazine. In December 2013, Holly was profiled in the Seattle Times/KUOW series '13 for 13,' featuring 13 arts leaders "poised to shape the future of the arts in the Northwest."

Holly is an alum of Seattle Repertory Theatre Writers Group, and the winner of the 2013 Gregory Award for Outstanding New Play and the Seattle Theatre Writers Award for Excellence in Local Playwriting for her play, Undo. Her play The Great Inconvenience was a 2019 Gregory Award nominee. Her play Court was one of four recipients of the 2020 Women Playwrights Initiative Ellie Award, a national competition.