Summer 2018: What our students, faculty, and staff are up to! 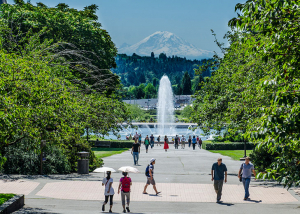 It's official! School is out for summer! But the students, faculty and staff are staying very busy during the next three months. Read on to learn more about what our School of Drama community will be doing this summer - and be sure to check out some of the productions featuring UW talent!

Alyssa Franks (PATP Student) - Alyssa will be exploring the San Juan Islands this summer as she performs in Shakespeare's The Tempsest with Island Stage Left, along with fellow PATP student Xavier Bleuel. You can catch the show between July 11th and August 12th on Orcas, Shaw, Lopez, and San Juan. More information at www.islandstageleft.org. Additionally, Alyssa will be participating in faculty member Cathy Madden's Alexander workshop in Friday Harbor!

Holly Arsenault (BA Alum, Staff) - In addition to her position as Director of Engagement, Holly is an award-winning playwright! This summer her new play, The Great Inconvenience, will be produced at Annex Theatre from July 27th - August 18th. Also, performing in the production is BA alumna, Jocelyn Maher and MFA alum Emily Woods Hogue is designing the costumes! More information at www.annextheatre.org.

Cathy Madden (Faculty) - In addition to teaching in Japan and Australia, as well as running her annnual residential workshop in Friday Harbor, Cathy Madden will be one of the featured Continuous Learning Teachers at the 11th International Congress of the Alexander Technique in Chicago, focusing on "Evolving Excellence." Her book, Teaching the Alexander Technique: Active Pathways to Integrative Practice, published by Jessica Kingsley, will debut July 19.

Amanda Friou (MFA Directing Student) - This summer Amanda will attending the National Puppetry Conference at the Eugene O'Neill Theatre Center in Connecticut. The National Puppetry Conference provides a meeting and creating ground for master artisans to pass their craft and ingenuity to new artists in the field of puppetry. After that, Amanda will be heading to Scotland to be the TA on the School of Drama Edinburgh Fringe Festival study abroad trip!

Scott Magelssen (Faculty) - This summer, Scott will be co-teaching in the Summer Institute for the Arts and Humanities, sponsored by Office of Undergraduate Research and Simpson Center for the Humanities. Twenty students get scholarships from Mary Gates Foundation to do individual research projects on this summer's theme of Seattle’s Upside Down (untold and underrepresented stories about the people, politics, and ecology around Puget Sound). Field trips will include excursions to Seattle’s actual underground, to the Duwamish River, and to Tacoma for the Civil Rights Walk co-created by Sara Freeman at University of Puget Sound and School of Drama PhD Student, Monica Cortes Viharo.

Elliott Chinn (Undergraduate Drama Major) -  Elliott will be traveling to Edinburgh, Scotland to study abroad and explore the Edinburgh International Festival on the School of Drama study abroad trip. He will also be traveling to Nicaragua to work with an organization called Global Medical Brigades to provide medical support, through triage clinics and medications, to aid communities where healthcare opportunities are almost nonexistent.

Tré Cotten (PATP alum) is playing Prince Charming in Theatre Under the Stars' production of Rodgers and Hammerstein's Cinderella in Vancouver, BC. More info at https://www.tuts.ca.