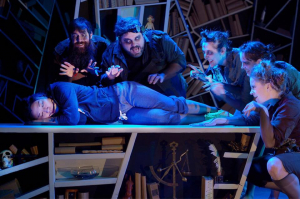 Yesenia Iglesias (PATP '14) is currently performing in Charles III at the Shakespeare Theatre Company in Washington D.C. from now until March 12th.

Cameron Irwin (BA '10) did the scenic design for Before We Flew Like Birds, We Flew Like Clouds, a world premiere dance piece at Velocity Dance Center from March 9th-April 1st.

Check out this interview with alumna Jean Smart (BFA '74) about her role in FX's new hit sci-fi show, Legion. You can catch the show at 10:00pm on Wednesdays on FX.

Take a gander at this! Gregg Henry (BFA '75) did an interview with Columns Magazine about playing Hollis Doyle on ABC's Scandal.