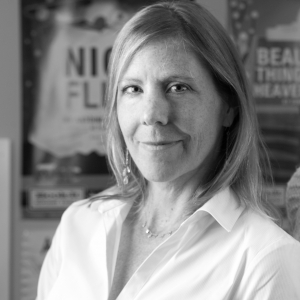 Myra Platt is the Founding Co-Artistic Director of Book-It Repertory Theatre. Book-It is the recipient of Seattle’s 2010 Mayor’s Arts Award and Washington State’s 2012 Governor’s Arts Award. As director, adapter, actor, and composer, Myra has helped Book-It produce over 100 world-premiere stage adaptations. Most recently she directed the acclaimed 5-hour event The Amazing Adventures of Kavalier and Clay by Michael Chabon. She adapted and directed Jess Walter’s The Financial Lives of the Poets (Gregory Award Nominee for Best Production and Best Director).

Her adapting/directing credits include The River Why, Night Flight: An Operetta, Red Ranger Came Calling, The House of the Spirits, Giant, I Know Why the Caged Bird Sings, Cowboys Are My Weakness, Roman Fever, A Telephone Call, and A Child’s Christmas in Wales. Directing credits include Persuasion, Plainsong, Cry the Beloved Country, and Sweet Thursday. She adapted Garth Stein’s The Art of Racing in the Rain and co-adapted Owen Meany’s Christmas Pageant with Jane Jones. She composed music for Prairie Nocturne, Night Flight (with Joshua Kohl), Red Ranger Came Calling (with Edd Key), The Awakening, Ethan Frome, Owen Meany’s Christmas Pageant, A Child’s Christmas in Wales, A Telephone Call, and I Am of Ireland.  Her acting credits include Prairie Nocturne, The Beautiful Things That Heaven Bears, The Awakening (2000 Honorable Mention Backstage West Los Angeles Garland Awards), Howards End, Winesburg Ohio, Eudora, What We Talk About When We Talk About Love, I Am of Ireland, A Telephone Call, and she originated the role of Candy Kendall in The Cider House Rules Parts One and Two.

Outside of Book-It, Myra has performed at Seattle Repertory Theatre, Intiman, New City Theatre, and the Mark Taper Forum. She has taught and directed at University of Washington, Cornish College of the Arts, University of Arizona, and University of New Mexico. She studied performance at Northwestern University (B.S. Analysis and Performance of Literature) and Circle in the Square. She is pleased to be the recipient (with Jane Jones) of the Paul G. Allen Family Foundation Founders Award, the 2010 Women of Influence from Puget Sound Business Journal, and to have been named by the Seattle Times as Unsung Hero and Uncommon Genius for their 20+ year contribution to life in the Puget Sound Region.