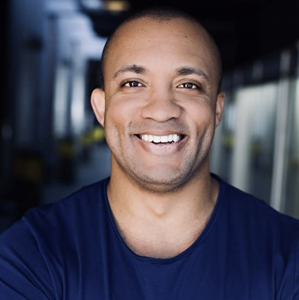 Tré is an artist and an educator currently based in Vancouver, BC, who received his MFA in Acting from the University of Washington in 2017. He is known for his work as a dialect coach for Eli Goree and Leslie Odom Jr. in the movie One Night in Miami. Lately, he's been keeping busy serving as Dialect Coach for Amazon’s The Peripheral; CBC & BET’s period drama The Porter, The First Lady and as Acting and Dialect Coach on Universal’s upcoming horror trilogy, The Exorcist. Mr. Cotten is set to Associate Direct the SONGBIRD, A New Musical Off Broadway at the Huntington Theatre in Boston, MA (2023).

Mr. Cotten will be in residence at UNCW teaching his course that was previously workshop with UW’s Grad actors, “Freeing the Black and Indigenous Voice: Where does the music of a people meet with heightened text?” and directing a devised piece that brings Shakespeare to the same relevance as Jazz and Hip Hop. Mr. Cotten was the 2021 Keynote Speaker for VASTA’s Conference where his address will be published and featured in their upcoming March 2022 issue.

His previous roles include: Clifford Lewis in ACT Theatre's World Premiere of DAISY, George Murchison in 'A Raisin in the Sun' at The Seattle Rep, Marc Antony in the Virginia Shakespeare Festival's Production of Julius Caesar, Ken (Smokey Joe's Café), Eat Moe (Five Guys Named Moe), Don Kerr (A Chorus Line), Lun Tha (The King and I) and Leading Player (Pippin). Film and Television credits include: 'One Tree Hill' for the CW Network, 'East Bound and Down' with HBO and 'Frat Brothers' for the BET Network. He has also received awards for his role as Paul in 'Six Degrees of Separation' and as Harpo in 'The Color Purple the Musical'. He is a proud member of Actors Equity Association & Screen Actors Guild.