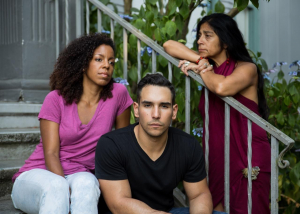 Yesenia Iglesias (PATP 2014) with Jany Bacallao and Rose Cano in Water by the Spoonful at Theatre22.

Christine Tschirgi (MFA 2007) designed the costumes for and Yesenia Iglesias (PATP 2014) plays Yaz in Water By the Spoonful, produced by Theatre22 and opening October 23 at West of Lenin.

Christopher Goodson (PhD candidate) published a couple of articles on Howlround, including an interview with playwright Diane Rodriguez and a piece about Seattle company eSe Teatro.

Holly Arsenault (BA 2001) wrote a one-act in collaboration with Dr. Andrew M. Scharenberg as part of Infinity Box Theatre Project's Thought Experiments on the Question of Being Human: Genetics and Synthetic Biology. Read more about the project in the September issue of Perspectives.

For Seattle Rep's A View from the Bridge, Geoff Korf (faculty) designed the lighting and Geoffrey Alm (faculty) served as the fight director.