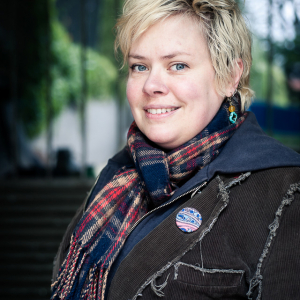 A Founder and Co-Artistic Director (2004-2008) of Washington Ensemble Theatre (The Ensemble), Jennifer serves on the Board of Directors of the National Network of Ensemble Theatres (NET) and The Committee of the Whole at Smoke Farm, an interdisciplinary artist’s residency facility.

The recipient of 2006 Stranger Genius Award in Theatre, she was named “Best Scenic Designer in Seattle” by Seattle Weekly in 2005 and received two 2006 Seattle Times Footlight Awards for her designs of Winter’s Tale at Seattle Shakespeare Company and Swimming in the Shallows for The Ensemble. Local directing credits include In Disdress and In Disdress Now: REDUX by Marya Sea Kaminski, 100 Heartbreaks and Here’s What Happened, with “Awesome” the Band and blahblahblahBANG! A Pistol Fit in One Act: an original adaptation of Hedda Gabler commissioned by On the Boards. Jennifer holds a MFA in scenery design from the University of Washington and a BFA in theatre design and directing from the University of Rhode Island.