The Modern Girl Around the World 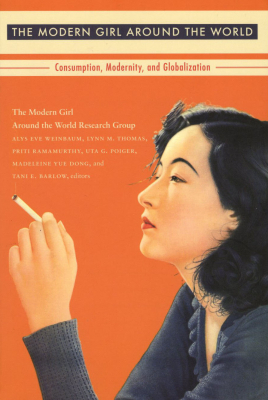 During the 1920s and 1930s, in cities from Beijing to Bombay, Tokyo to Berlin, Johannesburg to New York, the Modern Girl made her sometimes flashy, always fashionable appearance in city streets and cafes, in films, advertisements, and illustrated magazines. Modern Girls wore sexy clothes and high heels; they applied lipstick and other cosmetics. Dressed in provocative attire and in hot pursuit of romantic love, Modern Girls appeared on the surface to disregard the prescribed roles of dutiful daughter, wife, and mother. Contemporaries debated whether the Modern Girl was looking for sexual, economic, or political emancipation, or whether she was little more than an image, a hollow product of the emerging global commodity culture. The contributors to this collection track the Modern Girl as she emerged as a global phenomenon in the interwar period.

Scholars of history, women’s studies, literature, and cultural studies follow the Modern Girl around the world, analyzing her manifestations in Germany, Australia, China, Japan, France, India, the United States, Russia, South Africa, and Zimbabwe. Along the way, they demonstrate how the economic structures and cultural flows that shaped a particular form of modern femininity crossed national and imperial boundaries. In so doing, they highlight the gendered dynamics of interwar processes of racial formation, showing how images and ideas of the Modern Girl were used to shore up or critique nationalist and imperial agendas. A mix of collaborative and individually authored chapters, the volume concludes with commentaries by Kathy Peiss, Miriam Silverberg, and Timothy Burke.