“Performing a Viking History of America: The 1893 Voyage and Display of a Viking Longship at the Columbus Quadricentennial” 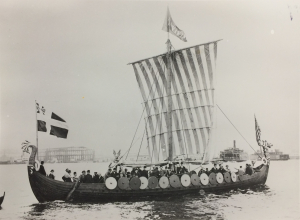 Viking
Axel Andersson and Scott Magelssen, “Performing a Viking History of America: The 1893 Voyage and Display of a Viking Longship at the Columbus Quadricentennial.” Theatre Journal 69.2 (June 2017), pp. 175-195.

In 1893 sea captain and newspaper publisher Magnus Andersen led a group of Norwegians in reconstructing a Viking ship based on the remains of a thousand-year-old vessel unearthed the previous decade from a burial mound near the south coast of Norway. Appropriately named Viking, the ship sailed to the United States to appear at that year's World's Fair, the World's Columbian Exposition in Chicago. On the clear day of April 30, Viking set sail from Bergen to cross the Atlantic Ocean from Norway to New England. From there Andersen's crew continued through the Erie Canal and the Great Lakes, and on to Chicago, where the ship performed navigational history alongside other vessels, including reconstructions of Christopher Columbus's three caravels, the Niña, Pinta, and Santa Maria, which celebrated the quadricentennial of the famous inaugural moment of encounter between the so-called Old and New Worlds. Along the way, Andersen and his crew were ambushed by a mob of "Columbus adherents" in Brooklyn and wound up in jail for the night, crashed with a tugboat in the canal, and dealt with jeers from naysayers along banks and bridges. They also bested the fastest yachts in impromptu races in the Great Lakes, received high-profile supporters, and drew record crowds in Chicago.

How does one make sense of a Viking ship reperformance at Columbus's anniversary party? The Norwegians arrived ostensibly claiming that Leif Eriksson had set foot on American shores centuries earlier than Columbus, an inconvenient counter narrative to the story of the Spanish-financed Italian explorer discovering America. Moreover, they dared a North Atlantic Ocean-crossing in an open ship to prove it--with neither ship-to-shore communication, nor accompanying vessels to rescue these nineteenth-century Vikings should anything go wrong with the reconstructed ninth-century craft. A closer look at the Viking enterprise reveals, though, that the symbolic dimension of performing a "Viking" journey to the US was deeper than merely competing for the honor of first Europeans in the Americas in three main ways: first, for the Norwegians, the project performed fierce nationalism at a time when a large part of the society was actively propagating for independence from Sweden; second, for the traditional elites of the east coast, a successful Viking voyage could prove the historical existence of a Viking colony in New England, and thus constitute a whiter and more northern origin of the United States; and third, for Midwestern Scandinavian immigrants struggling to perform their own place in the American story, Viking stood to legitimize and reify their birth right as Americans. And Andersen, always playing his intentionality close to the vest, strategically allowed for each of these narratives to exist simultaneously.

Of particular interest for broader conversation, however, is the way in which Viking engaged in a kind of performative historiography on the shores of Norway, in the drawing rooms of Cambridge and Boston, in the carnivalesque atmosphere of the Chicago World's Fair--and indeed in the very itinerary cut by Viking's dragon-headed prow as it crossed the Atlantic and navigated the American waterways as no vessel had done before. In so doing, it provided an earlier example of "performance as research," engaging in a network of reconstructive dramaturgical techniques that seem to emerge concomitantly with the rise of the modern "nation" and appears constitutive of that construction. The nation in many instances is already a performative enunciation, looking towards a past, imaginary or not, to be inhabited from the point of view of the future. Indeed, we argue that the Viking performance clearly indicates a historiographic impulse to accurately reconstruct and perform the past as a way to support the nationalist project, that is to say: the dream of a new political and cultural narrative.