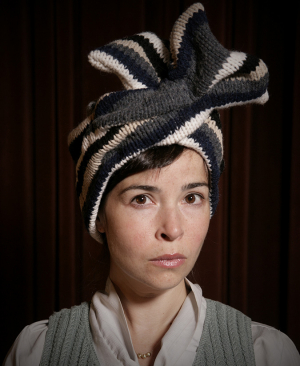 If you saw last quarter’s production of Tom Stoppard’s The Real Inspector Hound, you were lucky enough to see the beautiful, character-defining work of second-year Costume Design MFA candidate Melinda Hare. This quarter, Melinda tackles the costumes for the world premiere of EM Lewis’s Reading to Vegetables, directed by MFA Directing candidate Tina Polzin. Melinda walks us through the process for taking costumes from sketch to stage, as well as the unique challenges and opportunities of historical and contemporary work.

How do you go about conceptualizing your costume designs? What was the process for The Real Inspector Hound?

I read the script first. There is always an initial designers meeting with the director to find out what in the show is important to the director. What impulses are they following? Where does the director want to take the show? It’s important for me to know the script really well before that meeting, so that I can ask questions. For Hound, I looked at photos and fashion magazines from the time. I looked at production photos of Agatha Christie plays since that is what Tom Stoppard was watching and responding to. I sent off anything relevant from my research to Des [director Desdemona Chiang] to see her responses. Then I did rough sketches. Then changes and more sketches. With Des, she knew what she wanted, but she was also very open to what the designers were bringing to the table.

What was the process for you, as the costume designer, after the sketches were finalized?

Some costumes we built. Some we pulled from inventory. I got to go through all the ways we find things! For the costumes we built, I met with costume shop staff to talk about fabric type and quantity. Then I went fabric shopping – local and online. For costumes we pulled, I took my sketches and research into the stock rooms. We have great stock, so I didn’t have to compromise much from what I drew.

What was the inspiration behind Mrs. Drudges’s turban?  It was a very character-defining piece.

I was researching turbans from the ‘40’s. I found a couple really goofy looking ones. I made the turban myself and I just had to go for it. The scale was bigger than historical ones, but the style was based on research that I found.

Everything we built came out beautifully. Val Mayse made the women’s costumes and Deborah Skorstad did the tailoring. It’s amazing that we have the opportunity to work with professional drapers and cutters.

How is Reading to Vegetables different from Hound?

The style of the piece is quite different. It’s set in the contemporary world – a world familiar to all of us. That changed my approach. I could do research anywhere just by observing people. We all know what clothes look like now. The audience knows. It comes down to finding pieces that communicate the character.

What was the focus during the first year versus the second year?

In the first year, we concentrated on developing design process, learning how to work efficiently, and getting to the point of the play. The second year focuses on putting those lessons into practice.

When did you know you wanted to be a costume designer?

I knew I liked theatre, but it took me a while to figure out what part I was really good at. I took a costume design class my second year of undergrad. I always liked making things. I never took painting or drawing. I didn’t start studying drawing until I realized I needed that skill. That’s an ongoing process.

Why UW for your graduate studies?

Is there any play you’d love to design for?

I’d love to do a lavish 18th century show. I also love Dangerous Liaisons and Tom Stoppard’s Arcadia. On the other end of the spectrum, it would be fun to work on something campy and over-the-top.