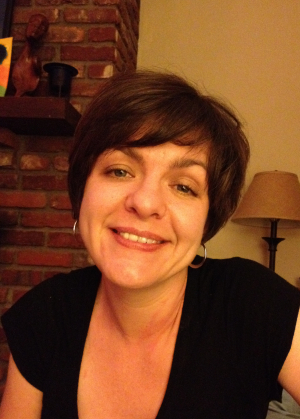 Lisa Jackson-Schebetta doesn’t remember exactly what she said at her first UW ASTR dinner. Since 2007 – her first year in the PhD program at the University of Washington School of Drama – Dr. Jackson-Schebetta has attended every annual dinner hosted by Professor Odai Johnson, head of the PhD program, during the American Society for Theatre Research conference. “I know what I’m going to say in Baltimore, though,” Jackson-Schebetta told me when I asked her how she has answered Professor Johnson’s yearly questions: From where you are now in your career, what things come easy to you and what are the things you struggle with? At the 2014 conference in Baltimore, she’ll tell the group that intellectual risk-taking comes easy to her now.

“The UW program has a huge capacity for intellectual risk-taking, and that is very unique,” explains Jackson-Schebetta. “There’s rigorous scholarship, yes, but there is also the ability to take huge risks.”

She made the decision to pursue a doctoral degree while completing her MFA at Virginia Commonwealth University. The MFA program there incorporated historical and critical perspectives, and she found herself interested in the critical conversations around production. When looking at PhD programs, she looked for one that could train her to be a scholar. “I had done my practical stuff. I wanted to be trained to be the best scholar I could be.”

She arrived at the UW thinking she knew the topic of her dissertation, but found herself surprised by how the UW program supported becoming a generalist, in the best sense of the word. She found herself encouraged to indulge all her curiosities, to read widely, but to remain “ruthlessly efficient.”

“I found that my task, as a scholar, was to be able to find my way into anything that presented to me,” she explains. “I reveled in the opportunity to try on all kinds of ideas.”

Jackson-Schebetta interviewed for a position at the University of Pittsburgh in January 2010, defended her dissertation in May 2010, and moved to Pittsburgh in August of that year. She just recently completed her third-year review – after taking a brief leave to have her first child. At Pittsburgh, she found a place that, like UW, supports risk-taking. Since earning her PhD, she has published widely in the area of performance and theatre of Spain and the Americas, including four scholarly articles, one bilingual book review, and chapters in two edited collections. Her first book manuscript is headed to completion in December 2014 and a second manuscript is underway. In addition to her scholarly work, Jackson-Schebetta has directed two major musicals (Sweeney Todd and In the Heights) and one devised piece for the University of Pittsburgh; been named an alternate for the Fulbright Core Scholar program in Bogotá; presented at 16 national conferences; and co-chaired the Theatre History Symposium of the Mid-America Theatre Conference.

On top of all that, she is in the midst of planning for the creation of a new Center for Embodied Research – a co-institutional venture with a peer at the University of Charlotte, another UW alumna, Jeanmarie Higgins. Both scholars work with ideas of corporeality, and hope to establish events and a publishing platform that will challenge boundaries to collaboration.

Lisa Jackson-Schebetta just oversaw her first graduate student to defend their dissertation and a second one already has a job offer. No doubt she has passed on the most important lesson she has learned: Indulge your curiosity, read widely, and remain ruthlessly efficient.