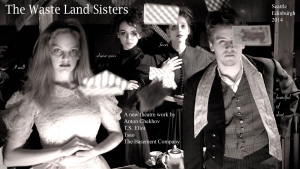 From July 29 to August 30, fourteen University of Washington undergraduate students will travel to the renowned Edinburgh Fringe Festival with School of Drama professors Andrew Tsao and L. Zane Jones. The course is sponsored by UW Study Abroad, and will focus on the study and experience of current global trends in theatrical practice, with an emphasis on viewing and critiquing international work. Professor Tsao has led previous study abroad trips to Edinburgh, as well as Pontlevoy, France.

Over the course of the month, the students will see a world of new theatre and performance at the largest and oldest international performing arts festival of its kind, while living in one of Europe’s great cultural centers. They will also participate in a unique range of workshops, classes and excursions designed to build fluency in the common language of the dramatic arts, while having the opportunity to meet artists and students from around the world.

The 14 participating students come from a variety of backgrounds and academic interests, including Drama, Nursing, English, Interdisciplinary Arts, and Environmental Science.

You can follow the company on their adventure at facebook.com/thewastelandsisters and twitter.com/wastelandsister. Also be sure to come back to our blog later this summer for a closer look into the experience as written by student and The Waste Land Sisters cast member Sylvia Kowalski. Sylvia will share with us more about the devising and rehearsal process, as well as her experiences performing at the festival.