Chekhov, Eliot and Fringe, Oh my! 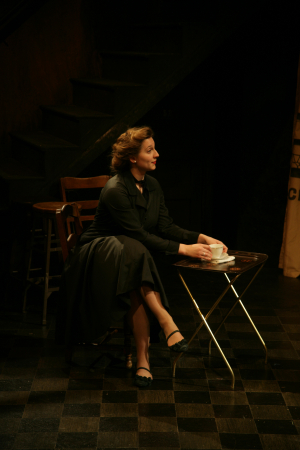 Sylvia Kowalski is a junior studying Drama, Astronomy, and Physics with a sweet tooth for everything theater related. She has worked on stage as an actress, back stage as a running crew member, and under the stage as a pit orchestra member. In her spare time Sylvia enjoys singing, dancing, eating and looking for exo-planets. She is the Finance Director of the Undergraduate Theater Society, and was recently seen onstage as Elizabeth Peachum in the School of Drama's main stage production of Vaclav Havel's The Beggar's Opera.

Hello UW Drama family. Sylvia Kowalski here! Thank you for clicking into the first of a couple posts about summer drama adventures! Quick background on myself: I am a junior studying Drama, Astronomy, and Physics; and I love theater, space, and food!

The reason for my posts are an attempt to articulate the incredible experience I have had the past few months devising a new piece of theatre and the saga of bringing it to the 2014 Edinburgh Fringe Festival.

Our show – a brainchild of UW Drama Professor Andrew Tsao and assisted in creation by Bobbin Ramsey, Heather Coit, Hannah Ruwe, Spencer Hamp and myself – is entitled The Waste Land Sisters.

When asked what our piece is about, I proudly proclaim, “The most intense mash-up of Chekhov and T.S. Eliot you can possibly pack into 58 minutes. Totally depressing, fantastical, hopeful, and grand!”

“The most intense mash-up of Chekhov and T.S. Eliot you can possibly pack into 58 minutes. Totally depressing, fantastical, hopeful, and grand!”

Our small but mighty band combined the text from T.S. Eliot’s epic The Waste Land and the siblings from Anton Chekhov’s The Three Sisters. Not your average dose of light reading, but we found the two complement each other surprisingly well.

Sitting down to read The Waste Land, or rather the 10th or 11th time sitting down to read The Waste Land, it became obvious that Eliot’s ability to differentiate each speaking character’s life without narration or stage direction is both subtle and insane. One rehearsal we described it as a close cam zooming through Europe during the wake of WWI catching snippets of characters’ lives whilst they referenced every ancient legend, religious text, great work of art, and pop culture icon of the past four thousand years. Oofda!

It was this quality of the poem – a cast of many characters sharing snippets of monologues that continuously interrupt each other – that drove The Waste Land into the hands of the Prozorov siblings to perform as a “game.”

Within the world of our narrative, the game is introduced to the young Prozorovs by their father as a form of escape, and as they grow older, their storytelling matures. There is a smorgasbord of styles and events within our piece (musical, dance numbers, pantomime, séance, recitation, realism, absurdism) that follows the growth of the Prozorov children as they repeat the game over and over for many years.

Hunkering down to devise these crazy ideas into fruition, the following steps were established:

1. Find the literary metaphor being used in the poem “section”.

These “sections” might be separated by title, topic, or literary style and vary from 10 lines to 140. Simply figuring out where the sections were was a doozy, but the most difficult step for my brain was realizing that these sections are where the poems true continuity lays, not in the seemingly random events taking place.

What we learned was that a piece focused on presenting the events rather than the metaphors would not be effective because it would tell an incorrect story and use literal vocabulary that does not match the poem. Next we had to…

2. Create a theatrical metaphor to mirror the literary metaphor.

Even though we were very proud to discover these metaphors, we couldn’t just stroll around the stage saying, “The West to an abused and broken woman insensitive to her own situation and like this woman we will be lost in the crowds!” We had to translate this into a theatrical picture or action or song that relayed this metaphor accurately, honestly, and always kept in mind the characters that Eliot chose to speak at that time. And last…

3. Pin point where and how this connects to the Prozorov narrative outside of the “game.”

At all times we had to keep in mind The Waste Land narrative as well as where the Prozorov siblings were within The Three Sisters timeline. Because continuity is already a battle to keep up with when taking in our piece, we had to make sure that the moments where we broke into the Checkhov world only clarified what happened before, never added extraneous layers!

And hopefully, after following these steps we created a scene that portrayed the metaphor of the section accurately!

This form of devising theatre has taught me more about accepting mistakes and moving forward than any activity in my entire life! Every day we had to accept the possibility of slashing a scene, song, or pantomime, regardless of the time spent creating it, if it did not serve the decided metaphor.

This form of devising theatre has taught me more about accepting mistakes and moving forward than any activity in my entire life.

Some examples – I remember with a heavy heart! – include no longer swing dancing with toddler-sized faceless mannequins or imitating jumping salmon with napkins!

After multiple months of creating, throwing out, repeating, and listening to Eliot read the poem one more time, we have a jam-packed hour of sibling drama picking through the dead of The Waste Land. We had a couple of previews for family and friends to test the waters. Taking our piece out of its rehearsal vacuum was one more step to completion.

We honestly have no idea how the Fringe crowds will receive a piece of this nature, but I hear that Edinburgh is pretty seasoned and as Professor Tsao said, “At Fringe everyone is flying without a safety net. And tons of people crash and burn. But that is why you do it.”

We left for Scotland on August 9th and start our performances at the Summerhall stage on August 14th! Wish us luck as we travel through The Waste Land, net free, and remember: Fear is just a handful of dust!