An actor, a dancer and a singer walk into a bar... 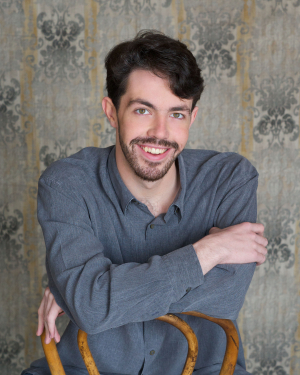 My name is Colton Sullivan. I am a drama major and I recently acted in Sweet Charity – the inaugural production of the UW Musical Theater Program. I played the roles of Monte the Cop, Marvin, Pompeii customer #9, and Daddy. I will be telling you about my experience as a drama major in this flagship production.

I must tell you when I was asked to write this, the thought was to reflect on my experience – as a drama major – acting in Sweet Charity, a play with an ensemble of dance students, vocal students, and the new musical theater students. The problem with this frame of writing, though, is that in this ensemble of 22 actors and a massive team of designers and crew members, there were a lot more than just those four majors represented. There were biology, scenic design, environmental science and resource management, to name a few, and many double majors.

But I shouldn’t call this a problem. It meant the ensemble was not only made up of artists, but of learners. And that’s good, because that learning occupied a lot of our time over the course of eight weeks.

The ensemble was not only made up of artists, but of learners. And that’s good, because that learning occupied a lot of our time over the course of eight weeks.

I am a graduating drama student, have acted in five shows with the UW, and have had zero dance training. My vocal training consists of long showers and one quarter of Drama 454: Singing for Actors. My point: I came into this with a skillset that covered about one-third of my required duties. The same held true for everyone, but each of us covered a different third. We needed to learn a lot, and the best people to learn from would be each other. The diversity of talents meant that someone always knew what was going on, and you could go to them when things got tough.

We began at boot camp, the three appropriately named 6-hour days of dancing and singing before we actually began rehearsals. This was a work-out. We rough-drafted the choreography for every large dance number in those three days. During the early rehearsals, dance and vocal majors made themselves present, as the choreography and score translated much quicker for them. But we, the cast, all learned a lot of things that some of us (myself included) had never really tried to do before. There was always a way to keep up if, for instance, you only knew how a plié worked because you took Suzuki class.

We began the first official rehearsal with a table read. Now this is where I, the “actor”, came in. With a cast of 22, only five were “Hutchinson regulars.” This was the day for us though. Character notebook by my side, finally able to read the script, learn the plot, and ask myself roughly nine questions. I was ready for the drama stuff. I comfortably became aware of something that would continue to help me help this project.

This was still theatre.

We were a cast of people reading aloud a script written by Neil Simon. The read went beautifully. Wilson [Mendieta, director and choreographer] encouraged everyone to experiment with larger-than-life characters and voices. I first read Daddy like a mix between Bob Dylan, Louis Armstrong, and a little Sammy Davis, Jr. Lightly put: It was horrible, but it was fun. Later someone told me they noticed people playing more with their characters after that scene. Afterwards, the ensemble discussed what our reaction to the play was, what it meant, what’s good about it? It was a long and healthy conversation that laid the foundations for a show about love, loss, luck, and individuality.

After that, everything got me more excited about this show: the set design, the costume fittings, the choreography, and the cast’s performances. It was Awesome. And the excitement was shared among the cast. Which was Awesomer. By week four we had a show we could see from beginning to end, and in week five we shipped it out to Meany Studio Theatre for tech week.

Thinking to myself while on a three hour break during tech week, I noticed that making a show is kinda like being a Power Ranger. You’re specially picked to be a team, actors and directors become the Red T-rex that does most of the talking, the designers are the Blue triceratops/shield/gadgets expert, the Band is the green ranger…you get my point. During tech week everybody comes together to form a giant fighting robot.

I noticed that making a show is kinda like being a Power Ranger...During tech week everybody comes together to form a giant fighting robot.

As tech weeks go, this one was smooth. But, that’s the drama major talking. This was most of the cast’s first extended tech process. Actors had to amuse themselves during large break periods while the designers constructed something that consistently amazed us every time we came on stage. The show suddenly had spectacle! Only one week later and we were ready to get this big bot running. Full speed, three times, with everything. A single preview with some experts and it was at last time to let in…the audience. Now an audience to an actor is both your best friend and the giant evil monster, if you’re following the Power Rangers metaphor. I can’t say this is the same for dancers and singers, but it seemed to hold constant. An actor always blames everything that goes wrong in shows on the audience first, but the truth is we had only great audiences. We sold out at least seven performances and those massive crowds, whether or not they laughed, loved it at some point or another. This show had a little something for everybody, and a little something that everyone should be for, despite Charity never getting the guy she never needed.

Everyone this side of the fourth wall was pleased.

In the end, to answer the question of what it was like being in a show with such a diversely talented group of learners, I would say I think it is just the kind of diversity we had in this ensemble that musical theater as an art, career, and major really needs. It’s fast, it’s funny, it’s completely absurd, and shockingly dark at times, oh and you’ll be popping out of the floor!

It’s a testament to the University that they are not only heralding in the musical theater major, but that they are already educating the talented people this career needs. And a special shout-out to Wilson, Kyle, Greg, Emerald, Casey and Adrienne, our fabulous directing team that made this show so much more than your average Charity case.