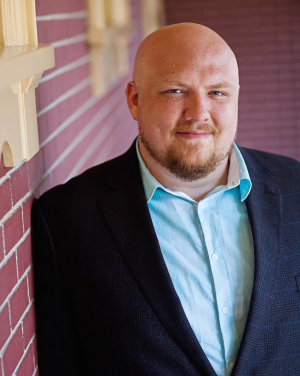 School of Drama senior David Borning recently discovered that the team he assembled to express his design for the coveted 2016 Walt Disney Imagineering Imaginations Design Competition was selected as one of six finalist teams from across the country.

Each finalist team is awarded a five-day, all-expense-paid trip to Imagineering’s main campus in Glendale, Calif., from January 25 to 29, where they will present their projects to Imagineering executives and take part in an awards ceremony on January 29. Finalists also have an opportunity to meet and network with Imagineers, go behind the scenes where Disney magic is created, and interview for paid internships during their visit. The top three placed teams will be awarded cash prizes, and an additional $1,000 grant will be awarded to the first place team, to be equally divided among its sponsoring universities.

For this year’s competition, students from American universities and colleges were given the following challenge: Design a traveling experience that will tour small towns across the United States so families who do not have the opportunity to travel to a Disney Park can have a Park experience.

David is currently a senior at the University of Washington majoring in Drama Design and minoring in Digital Arts and Experimental Media (DXARTS). He has always had a passion for interactive themed experiences and has been steering his course work successfully in that direction at both the School of Drama and DXARTS. “Ever since my first visit to Disneyland I’ve seen a future in expanding the ability of theme parks and dark rides to create more complex and emotionally moving experiential narratives,” states David. “I hope to be a part of that future.”