Fresh from the Fringe: Isabel Martin's (BA '17) Lesson in Art, Scotland, and Self-Discovery 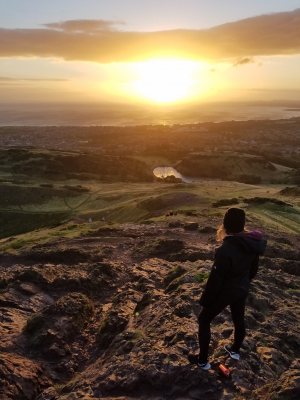 Isabel Martin standing on top of Arthur's Seat at sunrise

Almost one year ago now, I asked Professor Andrew Tsao when applications for the School of Drama’s summer study abroad expedition would be posted. As a freshman, I’d heard rumors about a magical trip undertaken by UW drama students to Edinburgh, Scotland, where the international festivals took place. There  these students  gorged themselves on theatre for a month, and I was determined to experience this first hand. Unfortunately, Professor Tsao  replied, the program wouldn’t be going ahead this year as he wasn’t available to lead it due to other commitments and student interest had slackened in recent years. Probably somewhat belligerently, I asked what could be done to make the program happen and he doubtfully suggested I find out if there were any other interested students.

As it turned out, there were. A whiteboard full of signatures, a petition to the Dean, a small mountain of paperwork, and ten months later eighteen undergraduates, one graduate student, and one professor set off for Scotland. It was an insane and magical month in an insane and magical city. Every  August, the city of Edinburgh plays host to the largest performing arts festival in the world. The population of the city more than doubles as performers and spectators flock to see the hundreds of plays, concerts, exhibits, movement pieces and various other forms of entertainments offered.

And we were right in the thick of it. We students, including our benevolent house-mother Tatiana Pavela, stayed all together in a three-story flat on Frederick Street, in the heart of Edinburgh’s elegant New Town. We were well within walking distance of all the festivals had to offer. Every day we had performances – sometimes as many as five in one day – to catch, and three times a week we would gather in the flat’s cozy living room, where Professor Scott Magelssen led a discussion-based class that focused on our experiences as spectators of foreign theatre.

Our adventure wasn’t restricted to the cobbled streets of Edinburgh. We also had the opportunity to explore the dramatic countryside: one weekend we went on a charmingly-guided trip to the Scottish highlands where we tried to catch a glimpse of the Loch Ness Monster, clambered like goats over the ruins of castles, and learned how to make whiskey at the Tomatin distillery. We ate haggis, and fish and chips, and drank too much beer at the local pubs. I climbed Arthur’s Seat, the highest hill in Edinburgh, twice: once to watch the sun rise, and then again to see it set on the evening before we left. I think we all fell in love a little bit; with Scotland, with the Festival, with each other.

A whiteboard full of signatures, a petition to the Dean, a small mountain of paperwork, and ten months later eighteen undergraduates, one graduate student, and one professor set off for Scotland.

But then, in what simultaneously felt like an eon and the blink of an eye, it was over.  Bags were packed, hugs exchanged and we all said goodbye to Frederick Street. I spent the next ten days traveling throughout the UK with my roommate and artistic collaborator Sam Jones, visiting the Isle of Skye, Nottingham, and the ancient Roman ruins in Bath on our way to London. But now I, too, find myself on a plane home, overwhelmed by nostalgia. As I packed up on our last night I was struck by all of the things I had accumulated during the trip. So much, in fact, that I bought two extra bags in order to get it all home. Mostly it was small things – souvenirs and mementos for friends and family back home of no great objective value. But as my bags grew heavier I also began to feel the weight of the memories they held.

A few of these items stand out, first among them the food. I brought home with me four packets of caramel-flavored Digestive biscuits, a bag of Maltesers, and at least three different kinds of tea; which  is a pretty good representation of my diet in Edinburgh. (Haggis, unfortunately, is illegal in the U.S., so none of that came home with me.) Maybe not healthy, but definitely homey – and our new little home on Frederick Street is exactly what comes to mind when I smell the sweet hay-like scent of the breakfast tea. It smells like 9:30am classes in our pajamas, snuggled up under blankets that we’ve dragged from our beds, passing around packets of Digestives as we share thoughts on the latest round of shows we’ve all seen. It didn’t take long at all for the cramped little flat to become a home, and the people in it a family. We shared food, we shared jokes, we shared tears.

The group created  one of the most intense and intensely supportive environments I’ve ever been a part of and highlighted, for me, the importance of building a creative cohort. It was a positive space, but also one of passionate debate and discussion. This was necessary: the sheer volume of content that we consumed would have been impossible to process without peers with which I could  bounce ideas off, test theories, and compare reactions.

Tucked into a side pouch of my carry on is a small plastic bag that contains all the ticket stubs I collected during the trip. Although I suspect I might have lost a few, I have almost 50, and that doesn’t even include  the tickets from other attractions like castles and museums and art galleries. Averaged over the 30-day-long-program that’s something like over two hours of content per day, but it often felt like more. If I’m being honest, before this trip I didn’t see much theatre. I’d excuse it by telling myself I was too busy with homework or my own rehearsals and call it good if I saw two or three shows in a month, typically at the bigger theatres in Seattle.

The sheer volume of content that we consumed would have been impossible to process without peer with which I could bounce ideas off, test theories and compare reactions.

Many of the shows suprised me: sometimes a well-reviewed performance fell short of expectations, or sometimes a production you knew nothing about would knock your socks off. The second show we saw, Once… by Russian theatre company Derevo, completely swept me away despite my previous disinterest in absurdist theatre, changing my mind about the genre. It is advice I’ve heard before from our professors: see art, see as much as you can – it’s the best way to grow as an artist. But it’s a hard lesson to internalize until you’ve done it and can step back and see the impression that it has made on you.

For me, that impression is actually visible, and I’m not talking about how I finally got my ears pierced on the trip. For the last six weeks I kept a journal, recording my thoughts and reactions to the shows and places and people I encountered. By now it’s a mess, really. The spine is cracked and the corners are bent. There is a pale orange stain across the top of the pages, the result of a structurally-unsound box of couscous. My handwriting is slanted and scribbly due to too much enthusiasm and not enough time. Inside and out it looks as though it’s been through a battle.

But it’s the most valuable item in my luggage. My experience in Edinburgh was overwhelming on so many levels, but all the wonder, excitement, and discovery is captured here in ink and pencil (and couscous). Keeping the journal was a personal project but I wasn’t the only one who recorded the trip like this. Besides seeing the shows our main assignment was to keep what Professor Magelssen called “field notes” of our experiences. We were instructed to pay special attention to what was being performed by the people or places we encountered. This meant questioning our assumptions about what felt authentically “Scottish” (or “British” or “American”, etc.) and led to a lot of productive introspection about the role and  perspective of a tourist.

It is advice I've heard before from our professors: see art, see as much as you can - it's the best way to grow as an artist. But it's a hard lesson to internalize until you've done it and can step back and see the impression that it has made on you.

Tatiana and I had a  conversation at one point where we agreed that although the trip was outwardly structured as a way to experience something intensely foreign, many of us found ourselves discovering a growing sense of self-awareness, instead. I think that there is something about traveling, about living in an unfamiliar  environment and experiencing new societies, that  strips you down to the essential parts. The differences in culture, and particularly art in this instance, threw our routines and quotidian assumptions into sharp relief. Self-examination is unavoidable. Today I feel more “me” than I ever have before.

As a senior, entering my final year of undergrad and facing down the impending reality of postgrad life and the “Real World”, this trip has been particularly powerful. I am changed. I feel bigger now – and I don’t just mean the unfortunate result of all of those biscuits – full of thoughts and inspiration, and a hunger to create. If I were to boil my experience down into one lesson it would be this: Be open. Let the art in – let the world in. Let go of your assumptions about what you “like” or “don’t like” about art and consume all you can. Every experience is an opportunity for learning, even if all you learn is that this or that isn’t your cup of tea. But if you open your heart to new people, new places, or new ideas, you can be surprised.