Alumni Spotlight: Julia Sears --We Cry Havoc --Women in the Theatre of War 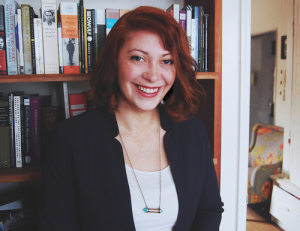 When the world is too much I turn to art. The only thing that has made sense to me of late has been to use my art form to process, explore, and probe relevant social issues that impact myself and my community. The theatre I make shows an audience a real life situation expressed in a metaphorical or fantastical way. By interrogating difficult issues in captivating heightened moments of performance I invite audiences into a conversation that otherwise may be too fraught to tackle. I hope these conversations spark the difficult questions that allow us to productively reflect on our endlessly fascinating, endlessly flawed world.

I have the unique privilege of being a director, which means I often get to choose what kind of theatre I make. I am currently in development for a project called We Cry Havoc a devised physical theatre piece created by a group of civilian and veteran artists. The play investigates the official inclusion of female service members into combat roles in the US military. Whew. That was a lot of jargon; let me break that down a bit better. I am directing a play with many authors. In fact, every artist working on the play is contributing to the writing and generating of the piece. Some of the play is dance, some of it is song or verse (think back to your Shakespeare 101 iambic pentameter lesson), some of it sounds just like me talking to you now (especially the parts I wrote). A portion of my collaborators are folks who have served in the military. Some are civilians, like myself, who have never served. Every one of us started our process by interviewing vets and active service members from a variety of military branches, deployments, ages, and genders. Our collective is making a play about women who are, and have been, serving in active combat. The characters are fictional but the story we are telling is very real 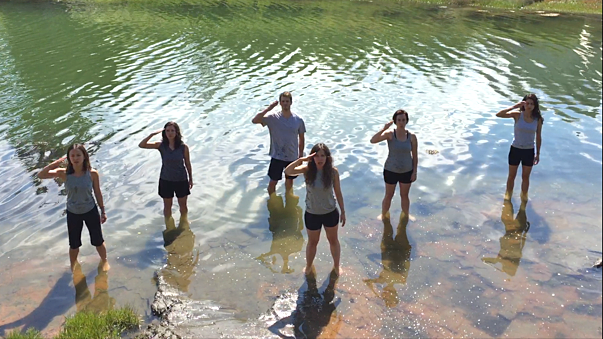 Performers of We Cry Havoc in an immersive showing of the play presented at the Barn Arts Collective. The piece began with a call to arms sung out from the ocean.

Until recently, women have been officially excluded from combat roles in the military. In December of 2015 Defense Secretary Ash Carter announced that all military jobs would now be open to women without exception. There is one very large piece of context that makes this decision by Secretary Carter particularly noteworthy. Women have been serving in combat. In the last decade in particular women have undeniably been in combat zones with their lives as much at risk as their brothers in arms. The difference being they have not received proper recognition for that service. Female members of the military have been officially “attached” to combat missions and not “assigned’ to them. This loophole has had women doing the same job as their male counterparts, often with no additional training and no institutional recognition for their service.

In the military, recognition for certain acts of service mean paths to promotion. It means better pay, credibility, and equal opportunities. Without being “assigned” to a unit on paper there are corners that are cut and elements overlooked. For example, the army’s bullet proof vests are designed for the typical build of a male soldier. If a smaller female soldier were to wear an improperly fitted vest in combat it would leave her heart, lungs and throat exposed to gunfire and shrapnel. The hope is that with the institutional incorporation of women small but life threatening details such as this will not be written off as trivial.

Despite the understanding by many within the military that women have been serving in these types of roles for many years now, there is considerable political backlash to their official inclusion. Those opposed say that the change is only political correctness rather than tactical thinking. Some go so far to say the policy “inverts the natural law and the rules that have grounded our civilization for thousands of year.” Ultimately the argument is still raging despite the progress that the armed forces themselves have made.

This debate has urgently motivated us to portray women’s official inclusion into combat on the stage. We don’t see this simply as a political issue. There are actual women who have and will continue to serve. Their distinct stories are thin on the ground. Popular narrative of American war is a rich one full of dynamic examples of the human condition. However, women are often the footnotes to the exploits of men. We are the spoils of war or the wives and mothers and daughters pined for on the home front. What happens to that narrative if we include the women fighting on the front lines? Can we use theatre to honor the diversity of their experiences? Can we authentically represent their complexity as individuals? 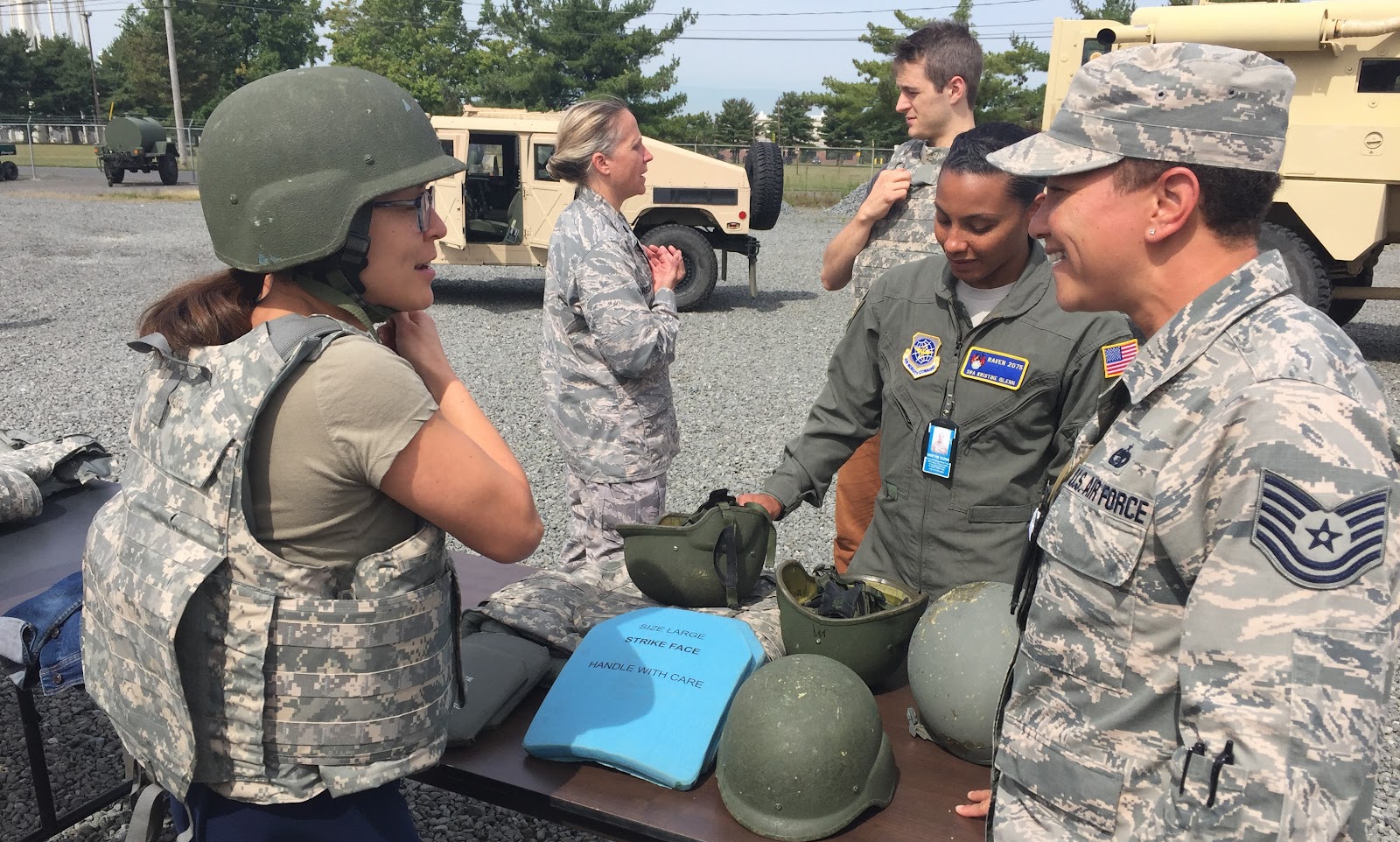 Co-writers and actors Rebecca Hirota and Jay Myers discuss uniform protocol with Airmen on a research trip to Joint Base McGuire-Dix-Lakehurst.

This piece of theatre is a conversation about women, war, and perception. By personifying women as warriors we seek to interrogate what blocks our nation’s collective pathway to equality. However, the threads of our examination run deeper than the military.The struggle of inclusion into combat roles is a microcosm of what many women experience in their own lives and careers. We are expected to constantly prove ourselves. You may have been doing a job for your entire professional career but are vilified for an attempting to gain proper recognition or compensation for your service. When on a recent research trip to the Fort Dix Military Base I asked one of the female Airmen who was giving us a tour what was the biggest misconception about female service members. Without missing a beat she said, “That we’re weak and can’t lead.” I am not a member of the military, I am not in life or death situations on a daily basis. But if you asked me the same question about the perception of women in my field I would have the exact same answer.

We Cry Havoc was conceived by Maggie Moore (UW Class of 2012) and Julia Sears (UW Class of 2012). It is being written by Adrienne Brammer, Rebecca Hirota, Jay Myers (UW Class of 2012), Victoria Nassif, Jessica Vera, and Emma Walton. It was developed in part with assistance from Opera House Arts and The Barn Arts Collective. It will premiere in New York in 2017. More information at www.wecryhavoc.com

Julia Sears is a director, writer, and activist based in Brooklyn, NY. She graduated from the University of Washington with a degree in Theatre Performance in 2012. Since then she has traveled the country directing plays that elevate the stories of women in America. You can track her every move at www.juliasears.org