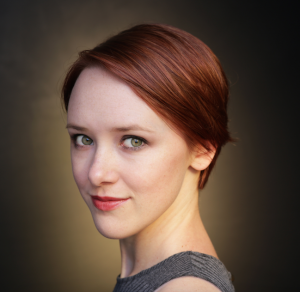 In spring of 2008, Jessica Martin was getting ready to graduate with her Bachelor’s Degree from the School of Drama. But before she left the halls of Hutchinson, she wanted to try her hand at one more thing: producing. She spent her last couple of months in undergrad organizing, rehearsing, and performing a one-woman show in collaboration with peers and faculty at the School of Drama. Now, almost ten years later, Jessica is in the processes of writing, directing, producing, and acting in her first feature film. We asked Jessica a couple of questions about her upcoming project, Abby and Tabby: Alone in the Desert, and her journey as an artist and entrepreneur.

BR: Can you tell us a little bit about the story of Abby and Tabby: Alone in the Desert?

JM: At its heart, it is a story about the power of female friendship. It's also a weird little comedy. The film starts with Abby on the road escaping her abusive husband when she finds Tabby, who was just beamed back to Earth having been abducted by aliens ten years earlier. Both Abby's husband and Tabby's old cult are on their trail, and by banding together, the girls escape their abusers.

BR: Where did the inspiration for the film come from?

JM: I wanted to tell a story about the power of women helping women. So often we see women in combative relationships, or solely romantic (usually hetero) relationships on screen. I have gotten through the tough times and celebrated the great times with the women in my life. I wanted to make a film to honor them. I'm also fascinated by the innate altruistic impulse women have to help other women. Where are the films about that?

I have gotten through the tough times and celebrated the great times with the women in my life. I wanted to make a film to honor them.

BR: When did you start getting involved in filmmaking?

JM: I have had an interest in film since I was very young. While I was at the UW, there weren't really any film classes, just the brand new Acting for the Camera class with Professor Andrew Tsao. It wasn't until after I had graduated and had worked on a few film and commercial projects that I was ready to start making my own work. It was just a matter of asking people I knew or had worked with to collaborate with me. Often we are so scared to just ask for something, but that is how everything starts. I made my first short film in 2011, and my second (filmed on the UW campus) in 2013. After moving to Los Angeles in 2014, it took me a while to get settled and meet new collaborators before I was ready to make a film down here. I'm also always looking to push myself farther, so making a feature was a natural progression.

BR: How is this experience of writing, directing, producing, and acting differ from your previous film experiences?

JM: Much more stressful! Now it feels so luxurious to just go to set to be an actor. To only have to worry about that one role. But making my own films, having my hand in so many aspects of the production, has made me a much more aware and conscientious actor. Having an understanding of what goes into every stage of making a film is a wonderful gift I have given myself by making my own projects.

Even the 290 series, which I loathed at the time, really gave me an awareness of theatre as a whole. You respect people much more when you understand what goes into their work.

BR: How has what you learned at the School of Drama influenced your work with Abby and Tabby?

JM: During my last quarter at school, I was interested in doing a one woman show. So I took the initiative, found the play, asked Professor Andrew Tsao to direct, a classmate to stage manage, and I had a show. The School of Drama provided a safe space to practice this entrepreneurial spirit. Additionally I'm grateful for every show I performed in for giving me more experience, and the 250 series for laying a solid technical foundation for my acting craft. Even the 290 series, which I loathed at the time, really gave me an awareness of theatre as a whole. You respect people much more when you understand what goes into their work. Also, the connections I made at UW still serve me today. Our costume designer on Abby and Tabby is fellow UW Drama alum Markie Beth Hu.

JM: We are currently running a crowdfunding campaign to help with our production costs that closes on Friday, March 31st. Perhaps the greatest challenge of making independent film is finding the financing! We hope to have our festival premiere in 2018 and then will screen in Seattle at the Northwest Film Forum. I'm so proud to be able to bring this film to Seattle and share it with my hometown crowd!

You can take a learn more about Jessica Martin at www.jessicaerinmartin.com and watch her acting reel here.