Alumni Interview: Shaudi Vahdat (BA '12) on Being a Producer and an Actor 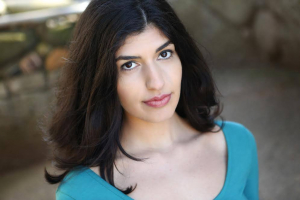 Before graduating with her BA from the School of Drama back in 2012, Shaudi took full advantage of her time at UW. Along with acting in several UTS production, Shaudi was the creator of Feast Your Ears, a curated night of musical performances that benefited Northwest Harvest, and directed Working, The Musical in her senior year. Since graduating she has performed with companies like Washington Ensemble Theatre and Book-It Repertory Theatre among others, and is also a founding member of The Horse in Motion. Through her projects with The Horse in Motion, she has learned the delicate balance between being an actor and a producer at the same time.

How did you get involved with The Horse in Motion?

SV: About a year or so after I graduated from UW, one of my former classmates, Mary Hubert, got in touch saying there was a cool script that a few people we went to school with were thinking of producing, and did I want to come be a part of a reading at her apartment? The script was Martin Crimp’s Attempts on her Life which turned out to be our first show. Our little team basically ended up founding the company while simultaneously producing the show (the type of multi-tasking most self-producers are pretty familiar with). We found that the community was interested in our work and in nontraditional theatre, so when the show closed we decided to keep making things together.

I also think it’s important to note that maybe a few months before that whole experience, I’d been invited to some play sessions (for lack of a better term) with a few of these same UW alum artists, and I think that was a large part of the spark behind our motivation to start this company together. We had just left school, we were hungry for work that let us contribute to the conversations around the societal issues we cared about, and we wanted to create our own opportunities. In those sessions, we explored what that might look like. The sessions were usually messy, a little chaotic, and full of the freedom to explore, and we work to keep all of those elements alive in our company today.

"We found that the community was interested in our work and nontraditional theatre, so when [Attempts on her Life] closed we decided to keep making things together."

What project are you working on currently?

SV: The Horse in Motion is currently in rehearsals for Wellesley Girl by Brendan Pelsue, which I am acting in. It’s set in the dystopian United States of 2465, where the very few remaining Americans in the world are all directly involved in the political system, and are trying to use it to solve a potential crisis together. It’s a beautiful script, because it explores democracy, the meaning of citizenship, and the responsibilities of individuals, institutions and societies in a way that is so human, funny, and warm-blooded. I’m so excited to share it with our audiences. And also I’m married to a robot and leading a country in it, so that’s pretty fun.

The entire Horse in Motion ensemble is meaningfully involved in some way, whether in producing or artistic roles, and the guest artists we are collaborating with are so wonderful to be in the room with. We even get to work with the playwright, who has been very generous with information and insights as we all try to build this strange new world together.

How do you balance the work of being an actor in the show, and a producer of it?
SV: That is a great question, and if you find someone who knows the answer, please have them call me. I feel like I am learning more about how to do this with every show, but for me, compartmentalizing goes a long way. I’ve found I need to let myself completely be in either actor mode or producer mode and not try to do too much at once. Actually I think our company in general has progressed over the years in terms of giving ourselves and each other the space to be in both of these roles separately.

"...it's totally okay to take big artisitic risks. If things don't turn out the way you hoped, not only does life not end, but you have the opportunity to learn and become a better artist..."

What is one of the most valuable lessons you've learned from self-producing work?
SV: That it is totally okay to take big artistic risks. If things don't turn out the way you hoped, not only does life not end, but you have the opportunity to learn and become a better artist and a better producing ensemble because of it. This is a very simple idea, but it's affected the way I approach my own work and the way I experience the work of others.
Is there anything else you would like to share about your upcoming production?
SV: That I hope you come see it! It runs April 13–29, at the 18th and Union Arts Space in Capitol Hill, and tickets are on sale now: http://wellesleygirl.bpt.me/. We’re having talkback nights with some pretty exciting community members, so if you’re craving some meaningful conversations, please check out our website for updates on that as they become available.
News Category:
Share
PrintPDF