The Odyssey: An Exploration of Finding Community 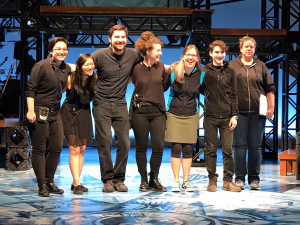 These were the three values that we as an ensemble would live in. Marya Sea Kaminski, the director of the Seattle Public Works Odyssey, would call upon these values every day and she led by example.

When Marya first brought me into this project, I had no idea what it was, though I had vague recollections of what she had mentioned to me in passing while stage-managing Iphigenia and Other Daughters at the UW. I distinctly remember her saying that it was “a massive project that requires a lot of heart.”

Flash forward to about a year later, I joined the project and I was thrown into the most intense stage-managing experience of my life.

It sounds like an easy out - but I really didn’t have any specific expectations coming into the project. All I knew was that Marya was our captain and that I was going to be interacting with a room full of 125 people who may or may not have acted before, let alone on a professional stage like the Seattle Repertory Theatre. I didn’t expect to come out of the show knowing at least one story from each person I interacted with, I didn’t expect to feel an overwhelming sense of sadness when I left, or the pure joy that I would feel when I’d see these folks get together as a community and leave it all on the stage. It was a bubble – a little microcosm of a space that you could enter in and feel like you could completely be yourself without any fear of judgment. I met so many different people from all over the board. If there is a picture perfect image of inclusion, it is this program. There were folks from the age 2 to 96 years old, all over the LGBTQIA+ spectrum, all over the gender spectrum, racial identity, socio-economic status, and all the intersections between them. Whatever expectations I may have had were completely exceeded. It was totally unique to other theatre experiences I’ve had in a way that can only be described, as “coming home” to a place I never knew actually existed. It was a profound experience in in the way that though I didn’t KNOW the cast and crew when I first joined – I knew them in the sense that they are and make up “Seattle.” They are the everyday people and the folks you who pass in the grocery store that you don’t think a second thought. They are the folks that make Seattle what Seattle is – a glorious melting pot of identities and experiences that don’t mind a little rain. This was not just a theatre experience – although much of my job was wrangling and doing paperwork (as a stage manager on the team) - but really a wonderful opportunity to hear stories that I never have heard before, and to met so many unique people that I wouldn’t have otherwise met, and can call them friends, and unforgettable parts of my life.

We held space for those unlike ourselves, especially when it is uncomfortable, ever showing the courageous humility it takes to be vulnerable in order to inspire others as well as ourselves. We were genuinely interested in the lives of our fellow community members. We shared in the joys, the bad days, and even several community meals.

We shared values; we battled self-doubt and uncertainty, and lived in unity. A group of characters affectionately called “Ody’s Crew” (the crew of Odysseus) was incredibly fitting and would serve as a lovely model for the rest of the ensemble. in that no matter how far we’d go and how hard it was – we always had each other’s backs. It was about taking care of your fellow person. We listened with open hearts and held space for others that have never experienced holding space without fear. And they returned with light.

The Odyssey was a perfect choice for the production, as it’s about finding home and welcoming strangers. It also allowed for 100+ cast members to grace the stage and still have individual moments that fit the world of the play. It also was the inaugural play at the New York Public Works program and having it start again in Seattle felt fitting. It was also not just a word-by-word interpretation of The Odyssey by Homer, but also rather a celebration of Seattle and it’s people. Although set technically in Ithaca - Marya made specific choices that also grounded the story in the heart of Seattle. L.B. Morse, the set designer constructed these beautiful and ominous cranes for the set that tied together what Seattle is right now – a growing community. The floor paint was a compass mirroring the Seattle Mariners logo. There were several references to Ezell’s Famous Chicken, Dick’s Burgers, local artists like Drag Queen Tipsy Rose Lee, that made a foreign world seem just like home.

At my core, I’m an avid advocate for equity in the arts and for the first time I actually got to see what it looks like in practice. “Active hospitality” is what we would often call it. We would we make sure every single person had what they needed to be successful – whether that mean providing catered community meals, community shower rooms, or cots to sleep in. Whatever they needed to feel like they could tell their story. I would love to see more theatre companies taking the risk and bringing in folks who might not have the resources to get an education in theatre. We as a system have become so product oriented that we forget about the people who are just outside our theatre bubble. These actors rose to the occasion and put on a kick-ass show – it was a professional show with fresh faces. It was a true testament to the power of giving and holding space for people to shine.

I’ll end with my favorite moment of the process. While about midway during the process – I started taking notes of things that I would hear that would make me believe in the power of kindness. A woman from one of the cameo groups – the Talia Symphony – couldn’t get offstage during curtain call because of a hip injury, so one of the equity actors pulled her in to welcome her as part of the group and they all bowed together. She left the stage in tears as she was moved by the fact that a young woman who she had never interacted with showed her unconditional kindness. Seeing the light and pure ecstasy in this group of people who have never experienced being cheered for (let alone a sold- out show of 800 on their feet before the show was even over) made it all worth it.

I genuinely look forward to future iterations of the Public Works in Seattle and fully trust that it will learn and grow into something really beautiful and hopefully spark a revolution across the states that this is what theatre could achieve.